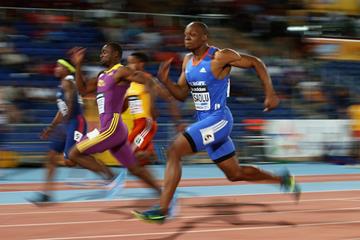 James Dasaolu won the closest ever men’s 100m at an IAAF Continental or World Cup to become the first British winner of this event since Linford Christie completed his World Cup hat-trick in 1994.

The fast-starting Dasaolu just hung on to his early lead to clock his second quickest time of the year, while Rodgers came from a long way back to take second place by almost literally the width of his running vest.

They were both given 10.04, a disappointing end to the season for Rodgers who has run seven sub-10 times in 2014, but it was an equal personal best for Ogunode.

Dasaolu got out well and edged into the lead at half way. He looked to have victory sewn up 20 metres from the line, but came under pressure from Ogunode who clawed back the deficit on his right while Rodgers finished strongly in the outside lane, thrusting his trademark headband across the line.

Trinidad and Tobago’s Richard Thompson, the fastest man in the field this year with 9.82, was surprisingly last in 10.24.