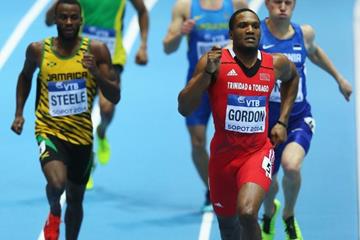 The Czech Republic’s Pavel Maslek stamped his authority on the men’s two-lap event with a dominant 45.79 semi-final victory.

The 23-year-old progressed from a swift 46.01 in the first round to assert himself as a strong contender for the gold medal and will be keen to add the world indoor crown to his European indoor and outdoor titles over the same distance.

US champion Kyle Clemons came home behind Maslak in 46.06 while 2010 world indoor champion Chris Brown of The Bahamas registered the third-fastest time of the round with 46.19 to claim the second semi-final.

The 35-year-old Olympic 4x400m champion is clearly running well in Sopot. He clocked the fastest time in the heats with 45.84 and could well be on course to replacing himself as the oldest medallist or winner of the event in the history of these championships. He will now become the oldest finalist in the 16 editions of the event.

Costa Rica’s 2012 world indoor champion Nery Brenes sped to a 46.25 season’s best in taking the runner-up spot behind Brown as Lalonde Gordon surprisingly finished down in third with 46.29 and only grabbed an automatic qualifying spot after Jamaica's Edino Steele was disqualified for a lane violation.

With an impressive 45.17 this winter, Gordon may well have another gear to step up to come the final.

Notable names who failed to progress include Dominican Republic’s Olympic silver medallist Luguelin Santos, who finished fourth in the second heat with 46.37, and Great Britain’s Nigel Levine, who was edged out into fourth place in heat one with 46.84.