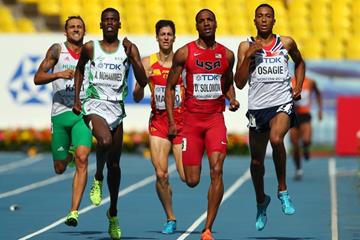 Duane Solomon finished fourth at the London 2012 Olympic Games and, in the absence of the three medallists from last summer, he was always going to be considered as a prime candidate for a place on the podium.

The 2013 US champion pressed his credentials further with an outstanding semi-final run in 1:43.87, the fastest ever semi-final performance in the history of the IAAF World Championships.

Running in the first of three semi-finals, Solomon threw down the gauntlet from the break for the inside after 150m and tore through the first lap in 50.67.

At the bell, Ferguson Cheriuyot was on Solomon’s shoulder and stayed there until 120m from home but as the Kenyan drifted backwards – crossing the line fifth before being disqualified for breaking too early – Saudi Arabia’s Abdulaziz Mohammed came out of the pack and chased Solomon home, the Asian Championships silver medallist just over a month ago finishing second in a personal best of 1:44.10.

Ethiopia’s World indoor champion Mohammed Aman left it late but showed he had an extra gear that will give Solomon pause for thought.

Colombia’s Rafith Rodriguez took the race through the bell in 52.22 before going backwards and then USA’s Brandon Johnson took up the running.

Johnson was still in the lead with 50m to go but Aman and prodigious Frenchman Pierre-Ambroise Bosse battled past him to take the two automatic qualifying places in 1:44.71 and 1:44.75 respectively.

Johnson was just 0.14 further back and finished third in 1:44.89, but it will be no consolation to him that he clocked the fastest time in the history of the championships over two laps of the track by someone who didn’t progress to the final.

In the third semi-final, Uganda’s Ronald Musagala adopted the same tactics that he had done in his heat and tried to win the race from the front, going through 400m in 51.71.

For three quarters of the race it looked like an effective plan but he started to struggle around the final bend. Down the home straight, Djibouti’s Ayanleh Souleiman and USA’s Nick Symmonds proved to be the strongest and secured their places in the final with relative ease, crossing the line in 1:44.99 and 1:45.00 respectively, the slowest of the three semi-finals despite the swift opening 400m.

There will be seven different nations represented in the final, with the USA the only nation to have two representatives, but for the first time since 1995 – a final won by Denmark’s Kenyan-born Wilson Kipketer – there will be no Kenyans in the final of the event at the World Championships.