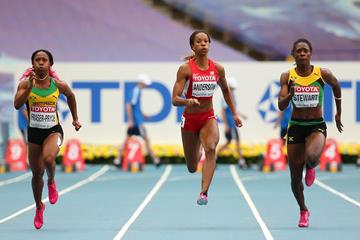 Eight of the women who lined up for the 100m semi-finals had broken 11 seconds this year. All eight of those made it through to the final.

There were few surprises across the three races as each of the winning times got quicker. In the first of those, Blessing Okagbare came through strong in the closing stages to cross the line neck-and-neck with USA’s Octavious Freeman, both athletes seemingly running at less than 100%, content with their 11.08 clockings.

Just the first two of each semi-final qualified automatically for the final, and it turned out that Verena Sailer’s 11.16 for third place was not enough to progress.

Defending champion Carmelita Jeter of the USA was up next. Team-mate English Gardner got off to a blistering start, as did Ivory Coast’s Murielle Ahoure. Jeter caught them both before the end, and once again the top two athletes record the same time, as both the Olympic silver medallist and Ahoure ran 10.95.

Gardner finished third in 11.00, which proved to be the fastest of the two non-automatic qualifying spots.

Olympic champion Shelly-Ann Fraser-Pryce closed out the round in style. The Jamaican shot out of the blocks and was never headed, crossing the line in 10.87 – the fastest time of the championships so far.

Compatriot Kerron Stewart also dipped under 11 seconds. Both she and Jeter will be contesting their fourth successive World Championships 100m final.

Alexandria Anderson grabbed the last remaining spot, meaning US athletes will fill four of the eight lanes in the final later this evening.