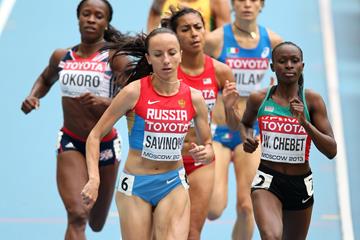 It was brutal and it was fast and for the first time in World Championships history three first-round women’s 800m heats dipped below two minutes to offer a tantalising taster of what to expect in tomorrow evening’s semi-finals.

With just three automatic spots available, plus the next four fastest across each of the four heats, it was always going to be a challenging qualification. Yet few could have quite predicted just how quick the pace would be from the opening heat.

The cool and overcast conditions inside the Luzhniki Stadium were clearly to the liking of Canadian Karine Belleau-Beliveau who blasted through 400m in 57.09, taking European bronze medallist Marina Arzamasova of Belarus with her.

Somewhat predictably, the 29-year-old Belleau-Beliveau (she was to finish seventh) blew a gasket in the final quarter of the race, but much of the field would have fully appreciated the pace which allowed the first five to qualify for the semi-finals.

Entering the home stretch you could have thrown a blanket over the lead quintet as British champion Marilyn Okoro held a slight lead from the defending champion and home favourite Mariya Savinova. It was Brenda Martinez of the US, though, who finished the strongest – taking the heat win in 1:59.39, just 0.04 clear of Okoro with Savinova looking ominously comfortable in third in 1:59.44.

Benefiting from the high tempo, the fourth and fifth place athletes also both advanced as two of the four fastest losers; Winny Chebet of Kenya (1:59.58) and Arzamasova (1:59.60).

Heat two was run at a similarly ferocious place as the five-time US champion Alysia Johnson Montano – competing with her trademark flower in her hair – decided she would not mess about. The US athlete blasted through 400m in 1:59.48 taking Wang and Natalya Lupu of Ukraine with her as 20 metres separated the entire field at the bell.

Johnson Montano was challenged on lap two but maintained her control, stopping the clock in 1:59.48 – 0.11 clear of Lupu, the European indoor champion, who also impressed. Halima Hachlaf of Morocco grabbed third in 2:00.04.

The rich quality of the first-round heats was maintained in a high-class heat three. Once again the pace was hot from the off with Lenka Masna on this occasion opting to play the role of the rabbit.

The Czech hit 400m in 57.43 with Malika Akkaoui of Morocco, the world No.2, and Olha Lyakhova of Ukraine following. Russia’s Olympic bronze medallist Ekaterina Poistogova, meanwhile, chose a more conservative tactic and was some 15 metres off the pace with plenty of work to do.

Fortunately for Poistogova, her strategy paid dividends as she finished strongly and without alarm to take second in 1:59.90, some 0.26 behind Akkaoui, an impressive heat winner. The USA World junior champion Ajee Wilson secured the third automatic spot in 2:00.00 to ensure all three US athletes advanced to tomorrow evening’s semi-finals.

The other two next fastest came from this heat as Rose Mary Almanza of Cuba (2:00.27) and Masna (2:00.31) – rewarded for her courageous front-running tactics – will also take their place in the last 16.

The final heat could not quite live up to the first three in terms of the pace but bearing in mind what had gone before that was understandable. Canadian champion Melissa Bishop opted to lead the field for much of the first 400m only for Kenya’s Eunice Jepkoech Sum to move ahead just before the bell passed in 58.96.

For the second half of the race it was Sum, the winner of the Kenyan World Championships Trials, and Elena Kotulskaya of Russia who came to the fore and the pair were a long way clear of the rest down the home straight. Sum took the win by 0.01 from Kotulskaya in 2:00.49 with Great Britain’s Laura Muir finishing like an express train to take the third automatic spot in a personal best 2:00.80.