The pre-event publicity mainly centred around the fact that the men’s high jump had one of the classier fields ever assembled outside of a major global championship and it lived up to the hype as Qatar’s world indoor champion Mutaz Essa Barshim soared over an Asian record of 2.41m at the IAAF Diamond League meeting in Rome on Thursday (5).

Into the bargain, it was also a meeting record and equalled the IAAF Diamond League record shared by Russia’s Ivan Ukhov and Ukraine’s Bohdan Bondarenko.

However, while Barshim was the star of the show for his soaring clearance over his winning height, with about five centimetres of daylight between his torso and the bar and even clear air between his heels and the apparatus, the competition will also be remembered for the six close failures at 2.43m, three apiece from Barshim and world champion Bondarenko.

After Bondarenko and Barshim both jumped 2.34m with their first attempts – the height which saw the last remaining other jumpers eliminated – the personable and pencil-thin Qatari flew over 2.37m, which prompted Bondarenko to pass.

The mind games continued at the next height as both men decided to pass 2.39m.

With Barshim, then going over 2.41m, Bondarenko knew that second place was secure and clearly thought he had nothing to lose by waiting until 2.43m and his audacious gamble almost paid off as all three of his attempts were only ruled as failures due to the bar being dislodged by his ankles.

Third place went to USA’s Erik Kynard, who was a little short of the form which saw him clear 2.37m in Doha and have one good attempt at 2.41m there, while Derek Drouin, who has jumped 2.40m this year, was fourth with 2.28m and Ukhov equal fifth at the same height but with more failures.

“After this competition have become more confident and really believe that the world record is possible. I was very close at 2.43m and only hit it with my ankle. The world record can come next week… although it might also be four years, nobody knows,” he added.

“I did not watch Bondarenko jumping today, I just focused on myself.”

In contrast to the delighted Barshim, Bondarenko was far from happy despite his contribution to a thrilling high jump display and three close attempts at a height only ever scaled before by the Cuban world record-holder Javier Sotomayor.

“I need to jump a lot to jump higher. I cannot say I’m satisfied,” said Bondarenko, perhaps tacitly admitting that his tactic of passing three consecutive heights might have been a mistake.

Someone who did get her tactics spot on was Ethiopia’s Genzebe Dibaba.

The indoor sensation hit the front in the women’s 5000m just after the bell, sweeping around her compatriot Almaz Ayana who, in similar fashion to the race over the same distance at IAAF Diamond League meeting in Paris last summer, had played unwitting pacemaker to one of her compatriots in a failed bid to draw the sting from them.

On that occasion, it was Genzebe’s elder sister Tirunesh who possessed the better speed and Ayana must be getting slightly fed up of the sight of the Dibaba family tearing her apart over the final 400 metres of races.

Javelin world record-holder Barbora Spotakova had her first serious competition since the end of 2012 – notwithstanding a low-key competition last September – due to the birth of her first child last summer.

It seemed like she had never been away as, after one foul, she flung her spear out to 66.43m with her second effort and had three other throws over 66 metres to win by a huge margin. All of her valid throws were farther than the rest of the field could manage.

Her young son Jan, who was named after the Czech javelin legend Jan Zelezny and who along with her partner Lukasz was in the stands watching his mother in action in Rome’s historic Olympic Stadium, might be too young to be impressed but he was probably the only one who wasn’t. 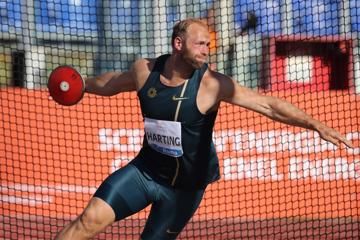 Harting continues to be Malachowski’s nemesis... 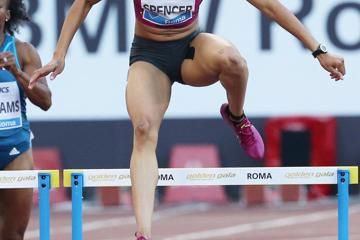 Spencer marks her territory in Rome as No.1 o...