For some time at Gateshead on Sunday (23), the European Team Championships was in danger of becoming the second European Indoor Championships of 2013. Such was the ferocity of the downpour in this north-east corner of England, not to mention the thunder and lightning, the field events had to be placed on hold.

As a wise precaution, the men’s Pole Vault had already been switched to the indoor facility next door to Gateshead International Stadium and the equally sensible decision was soon made to follow suit with the women’s High Jump.

Amid the meteorological machinations, Germany and Russia (and, for much of the afternoon, an inspired British team) fought out a nip and tuck battle that went down to the wire of the last two events.

By then, the host team were effectively out of the equation but Michael Bingham, Conrad Williams, Rhys Williams and Richard Buck sent the crowd home happy, combining to finish clear 4x400m winners in 3:05.37. The real drama unfolded behind them, Vladimir Krasnov pulling Russia through to second place with Jonas Plass and Germany back in fourth.

The High Jump had yet to finish and the closing stages were relayed on the giant screen in the outdoor stadium. The Russian squad jumped on to the top step of the podium in celebration as Maria Kuchina, the 20-year-old World  junior indoor record-holder, secured an individual victory and overall team success with a clearance of 1.98m, a personal best.

The drama left Russia standing high, if not exactly dry, with 354.5 points, Germany second with 347.5, Britain third with 338 and France fourth with 310.5. It completed a hat-trick of European Team Championships victories for Russia, who will have considerably more of their big guns firing on home ground at the IAAF World Championships in Moscow two months’ hence.

At the bottom end of the scale, Belarus (10th), Greece (11th) and Norway (12th) finished in the relegation places. They will be replaced in Braunschweig in 2014 by the Czech Republic, Sweden and the Netherlands, the three teams promoted from the first division.

For much of the second day, it seemed that the Germans, who led Russia overnight by a point, would be lining up as defending champions on home soil next year. They gained maximum points from the first completed event of day two, courtesy of Betty Heidler in the women’s Hammer. The 29-year-old World record-holder threw 74.31m in the opening round and finished 17cm clear of Poland’s Olympic silver medallist Anita Wlodarczyk.

There were just the two other German winners to come, though. Returning to the country where last summer he became Germany’s first track and field Olympic champion since Heike Drechsler in 2000, Robert Harting won the Discus with a 64.25m effort. And, after the women’s Shot Put had been delayed by the rain, Christina Schwanitz stepped forward to maintain her unbeaten record in 2013 with a second-round throw of 19.30m.

Ultimately, it was the number of Russian victories that stacked up to overall success. There were six in all, culminating in the clincher from Kuchina.

They came largely from emerging young talents like Kuchina. Dmitri Tarabin, 21, the 2010 World junior bronze medallist, won the Javelin with a second-round effort of 85.99m, a personal best.  Sergey Shubenkhov, at 22 already the Russian record-holder and European champion, proved a class apart in the 110m Hurdles, clocking 13.19 on a rain-sodden track, albeit with the marginal assistance of a 2.6m/s following wind.

Another 22-year-old, Aleksey Fyodorov, claimed the scalp of World indoor record-holder Teddy Tamgho with a third-round mark of 16.70m in the Triple Jump. Tamgho, continuing his competitive comeback after 20 months out of competition because of a fractured ankle, finished runner-up with 16.62m.

Having been unable to catch young Jessica Judd down the home straight in the 800m on Saturday, Ekaterina Sharmina made sure she had sufficient energy left in the tank for the final 100m of the 1500m, winning in 4:08.86. European champion Ola Golovkina was an even more emphatic winner of the 5000m finishing more than eight seconds clear in 15:32.45, with 19-year-old World junior 3000m bronze medallist Emelia Gorecka in second place on her British senior debut.

There were three home victories on day two, courtesy of the men’s 4x400m quartet and their female counter-parts (Eilidh Child, Shana Cox, Meghan Beesley and Christine Ohuruogu), who prevailed in 3:28.60, and Tiffany Porter, who took the 100m Hurdles in 12.62m, assisted by a 2.6m/s wind.

France entered the final day with high hopes of mounting a serious challenge but instead had to settle for fourth overall and four individual victories. Olympic champion Renaud Lavillenie required just two clearances to win the Pole Vault, succeeding first time at 5.60m and 5.77m. Christophe Lemaitre won the 200m by 0.20 in 20.27, assisted by a 2.4m/s following wind. Bouabdellah Tahri, runner up to Mo Farah in the 5000m on Saturday, took the 3000m in 8:05.31. And Eloyse Lesueur squeaked victory by 1cm with a 6.44m leap in the Long Jump. 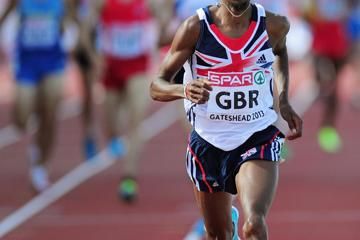