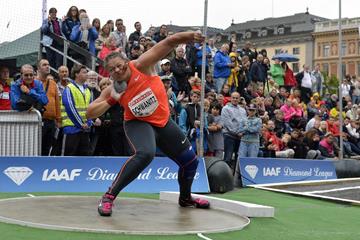 Christina Schwanitz effectively secured her first Diamond Race title as she won the shot put with a best effort of 20.13m, throwing in persistent and occasionally heavy rain in Stockholm’s Kungstradgarden square on Wednesday (29) on the eve of the main IAAF Diamond League meeting in the Swedish capital.

Germany’s 2014 European champion – who has 18 points and a nine-point lead over the USA’s Michelle Carter after four successive Diamond League wins this season – needs only to turn up to compete in the IAAF Diamond League final in Zurich on 3 September to end the sequence of four overall victories for the world and Olympic champion Valerie Adams, who is still finding her way back to fitness after returning to competition this month following operations last year to her elbow and shoulder.

Despite the testing conditions in Stockholm, Schwanitz was a model of consistency, fouling only one of her six efforts, four of which exceeded the distances achieved by any of her opponents, and the last of which, 19.24, replicated the best effort of the second-placed Carter.

Schwanitz has now gone over 20 metres in her last six competitions.

Adams’s demeanour became as gloomy as the prevailing weather as she produced fouls on her last four efforts, having to settle for fourth place with a best of 18.69m.

A fifth round effort of 18.74m took Hungary’s Anita Marton ahead of the frustrated New Zealander, who has yet to win in her three IAAF Diamond League outings this year.

Now the 30-year-old IAAF Athlete of the Year will ponder on whether to defend her title at next month’s IAAF World Championships.

Not part of the Diamond League itself, Canadda’s Tim Nedow won the men’s shot by more than a metre with 20.78m while teenage prodigy Wictor Petersson took the boy’s shot with the 5kg implement when he reached 21.51m, just five centimetres short of his recent best which he achieved to win the bronze medal at the IAAF World Youth Championships in Colombia two weeks ago.

Stockholm’s meeting organisers were one of the first to take big time athletics out of the stadium in 2007, a lead which several other meetings have followed, and this year they revived a tradition last observed here in 2011.

For the first time, this meeting has involved a week of athletics activities in the city, which started in Kungstradgarden on Monday with two days of children’s athletics, at which athletes including the 2013 world 110m hurdles champion David Oliver and Fabiana Murer, the 2011 world pole vault champion, as well as world indoor 800m champion Ayanleh Souleiman made appearances and signed autographs.

On Friday, after the main meeting, the general public will have the opportunity to race over 1000m in a fun run at the historic 1912 Olympic stadium and the arena will then host a weekend of international youth competitions.