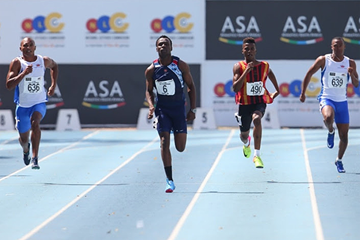 Many of the country’s leading athletes were in action at the South African Championships, which concluded after three days of action on Saturday (17), but the most noteworthy performance of the weekend came from an up-and-coming sprinter who has no global medals to his name – yet.

African junior champion Clarence Munyai had the crowd on its feet at Tuks Stadium in Pretoria, scorching around the track to shatter the national 200m record.

Munyai dipped on the line, stopping the clock at 19.69 (-0.5m/s) to take 0.15 off the national record set by world and Olympic 400m champion Wayde van Niekerk in Kingston last year. He narrowly missed the African record of 19.68 set in 1996 by Namibia’s Frank Fredericks.

“It’s a massive achievement for me,” said Munyai, who turned 20 just last month. “I never thought I would run that quick at the age of 20, so I'm really happy.”

An Olympian in 2016, Munyai also represented South Africa at the IAAF World Championships London 2017 and would have reached the semifinals but was disqualified for stepping outside of his lane.

Munyai didn’t contest the 200m final on Saturday; in his absence, Luxolo Adams won in a big lifetime best of 20.08 (1.8m/s). Up until three years ago, Adams’ time would have been a national record. Now, however, it ranks him just fifth on the South African all-time list.

Munyai wasn’t the only sprinter to set a national record in a semifinal.

Carina Horn sped to an 11.03 clocking in the 100m semifinals to break the national record of 11.06 that she had shared with Evette de Klerk.

Four years since his last national triumph, Simon Magakwe clocked 10.07 to regain the 100m title, running into a -1.3m/s headwind. Thando Dlodlo finished second in 10.15, having broken the national U20 record in the heats with 10.11.

Dlodlo went on to anchor the victorious SA junior invitational team in the 4x100m, winning in another national U20 record of 39.46. He also took the runner-up spot in the 200m in 20.41.

Semenya at the double

Her busy weekend started on Saturday morning with the 800m heats. Instead of coasting through with an easy qualification, she blitzed a 1:58.92 solo run. Later that day, she won the 1500m title in 4:10.68, winning by 13 seconds.

She was back on track the next day and duly won her specialist event in 1:57.80, her quickest ever time on home soil.

“It’s a great time,” said Semenya, who is now undefeated at 800m since September 2015. “Obviously we always want to experience something new. We need to try to run the same pace at home that we run in the European season. We're doing this for our people, and it's all about growing South African athletics.”

“I feel great, and happy to compete in front of a South African crowd,” said the world indoor silver medallist. “I’m happy with my performance today and it’s my first outdoor (meeting of the season), so I’m excited for more competition.”

“I just ran my own race and focused on my own 10 hurdles,” said Van der Walt. “This gives me a lot of confidence and now I know I can reach my sub-55 goal.”

Lindsay Hanekom won the men’s 400m hurdles in 49.17 in a race in which five men finished within 50 seconds.

Athletics South Africa and Jon Mulkeen for the IAAF