Both winners tonight were also the overall victors of the tour with combined heights of 464cm for Barshim and 395cm for Trost, each of them landing a $1000 bonus.

Held in a tennis hall with 1500 spectators, Trost sailed smoothly over all heights up to and including 2.00m. The last of her opponents bowed out of the competition with the bar set at 1.94m, so Trost went straight up to 2.00m, clearing it on her first attempt as she had done with all of the other heights.

The jump equalled the world indoor age-19 best (set by Yelena Yelesina in 1990) and makes her the second-best Italian of all-time indoors behind Antonietta Di Martino’s national indoor record of 2.04m.

She ended the competition by having two very decent attempts at 2.02m – a height that would have broken Blanka Vlasic’s meeting record of 2.01m from 2010.

“I’m amazed,” said Trost, winner of the IAAF World youth title in 2009 and IAAF World junior gold in 2012. “I trained hard during the winter but I didn’t know exactly what to expect from my competitions. Even 1.98m (in Udine earlier in January) was a great result for me. Two meters is a bonus and an unexpected result for many of us. Just to think that, last year I was jumping only around 1.92m, so this is a big jump forward.

“Of course, I was a bit scared of 2.02m because all heights with number ‘2’ at the beginning are big in my eyes. But I tried to focus on the attempt and to see what happened. It was very emotional feeling here and the crowd helped me a lot by their support – I felt like I am a part of this event.”

Bulgaria’s Venelina Veneva – who, at 38 years old, is twice the age of Trost – struggled with a hamstring injury but still managed a 1.91m jump to finish second. Emma Green-Tregaro and Olena Kholosha had close jumps at 1.94m but ended in a tie for third with 1.91m.

The men’s competition started with a big shock when Olympic champion Ivan Ukhov failed to clear 2.20m. “I do not know what happened,” he said afterwards. “It was more mental; after two failures I didn’t cope with the pressure.”

The battle for the victory started at 2.31m when three remained. World silver medallist Aleksey Dmitrik cleared it on his first attempt while Qatar’s Mutaz Essa Barshim needed three jumps. Home favourite Jaroslav Baba did not make it, but was content to finish third with 2.28m against a quality field that included World champion Jesse Williams.

Dmitrik had a good, but failed, attempt at 2.34m while Barshim cleared it to improve on his own world lead and equal the meeting record set by Ukhov in 2010. Dmitrik skipped straight to 2.36m but failed twice to exit the competition.

After one foul at that height, Barshim then had two very solid attempts at 2.38m to try to break the Asian indoor record, but it was not to be. “I tried and I think I can do it very soon,” he said.

BACK
Pages related to this articleAthletes
Alessia TROST 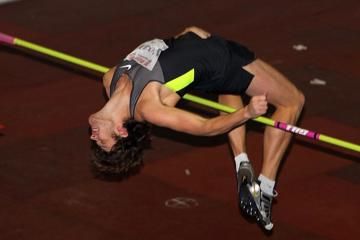 Ukhov and Trost take the honours at Hustopece...