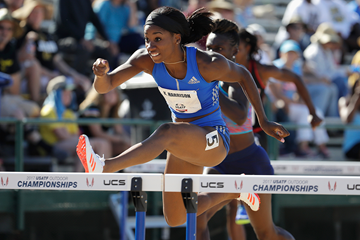 Kendra Harrison on her way to winning the 100m hurdles at the US Championships (Getty Images) © Copyright
25 JUN 2017 Report Sacramento, USA

Her wild card from winning the Diamond Trophy last year meant that Kendra Harrison was already guaranteed a spot at the IAAF World Championships London 2017.

But after missing out on the Rio 2016 Olympics and breaking a bone in her hand seven weeks ago, the world record-holder supplied evidence she is ready to land her first world title by winning the 100m hurdles in 12.60 on an eventful third day of the US Championships at Sacramento on Saturday (24).

Despite being the world record-holder, the 24-year-old had never previously won an outdoor national title. After running 12.54 (1.4m/s) in the heats and 12.58 (-2.4m/s) in the semifinal, Harrison once again faced a strong headwind in the final, this time -1.7m/s.

Olympic silver medallist Nia Ali, second in 12.68, and Christina Manning, third in 12.70, took the other spots on the US team for the World Championships. Because of Harrison’s wild card, 33-year-old Dawn Harper made the team in fourth. Harper won Olympic gold in 2008 and silver in 2012.

Harrison didn’t make it to Rio because she finished sixth at last year’s US Trials. She said she “learned from my mistakes” and plans to sharpen with races in Europe.

“Honestly, I just wanted to win,” Harrison said. “The times will come. I feel I’m going to peak at World Championships and get that title.”

Jasmin Stowers, who has finished in the top two in all of her races this year, clocked a world-leading 12.47 in her semifinal but was never in contention in the final and finished eighth in 12.94.

Tianna Bartoletta beat world leader Brittney Reese in a long jump duel between Olympic champions. Bartoletta had three seven-meter jumps and won with a best of 7.05m to Reese’s 6.98m.

Kendricks, the Olympic bronze medallist, became the 21st vaulter to clear 6.00m and the first US man to do so since 2008. Kendricks displaced 17-year-old Armand Duplantis (5.90) as the world leader. In third, Chris Nilsen set a North American U20 record of 5.75m.

“Six metres is a career point,” Kendricks said. “Every great jumper has at least one six-metre jump. If I can replicate even close to this at Worlds, I’ve got a shot at the title. Going for the gold in London is my goal.”

In the women’s shot put, Saunders was fifth heading into the last round before unloading a PB of 19.76m. Now she and Dani Bunch, who threw a PB of 19.64m, rank 1-2 worldwide. Olympic champion Michelle Carter made the team in third at 19.34m.

“It was great for women’s throwers,” Carter said. “It’s been a while since our throwers have been this competitive for so many women throwing really far.”

Kerley’s 44.03 beat one of the fastest 400m fields of all time, and now owns the year’s five fastest times. Seven men clocked 44.80 or faster, something that had happened only at the 2007 World Championships and 2016 Olympics. Gil Roberts was second in 44.22 and world U20 silver medallist Wil London III was third in 44.47, both PBs. Diamond Trophy winner LaShawn Merritt will join Kerley, Roberts and London at the World Championships.

Olympic champion Matthew Centrowitz suffered a surprise defeat in the 1500m and said afterwards that he had nearly shut down for the season. Robbie Andrews covered the final lap in 52.23 to seize victory, 3:43.29 to 3:43.41. John Gregorek was third in 3:43.99.

Andrews has yet to meet the qualifying standard of 3:36 for the World Championships.

Clayton Murphy, bidding for the first 800m/1500m double win in 84 years, jogged across the line in last with an apparent injury. He hobbled off the track and was carried away on a cart. It was indeterminate whether he would race the 800m final on Sunday.

“I’ve had a series of three injuries since April, and 10 days ago, I was ready to can the season,” said Centrowitz. “I’m not very good at handling one injury, let alone three, but I didn’t want to talk about it because I didn’t want my competition to know. I’ve got five or six weeks to get ready and hopefully bring back another medal from Worlds.”

In the women’s 1500m, Olympic bronze medallist Jenny Simpson won a fourth consecutive national title. She controlled the race from the front and clocked 4:06.33. Kate Grace was second in 4:06.95 and Sara Vaughn, a 31-year-old mother of three, third in 4:07.85. North American record-holder Shannon Rowbury, who on Friday had finished second in the 5000m, was eighth.

Notable from preliminaries was the failure and then reinstatement of 2005 world champion Bershawn Jackson in the 400m hurdles. Jackson, 34, who has made seven consecutive World Championships teams, was fifth in his semifinal in 49.52. But after a disqualification, he moved up to fourth and made Sunday’s final.

Allyson Felix qualified for the 200m final but said she probably would not run that race in London even if she makes the team. She has a wild card in the 400m.