McLaughlin, Hill and Lyles impress at US Youth Championships

One year on, McLaughlin is finally old enough to compete at a global championship. And she’s even faster.

At the US World Youth Track & Field Trials in Lisle, which concluded on Wednesday (1), McLaughlin was one of the star performers. Still only 15 and with another year left as a youth athlete, she dominated the 400m hurdles to win in 55.28.

It is the second-fastest time ever by a youth athlete and a world age-15 best. She is now just 0.08 away from Leslie Maxie’s long-standing world youth best set back in 1984.

“It was more about getting my technique down and finishing my race stronger than yesterday,” said McLaughlin, who clocked 56.66 in the heats; a time no other junior – let alone youth – in the world has bettered this year.

“Coming off with a PR is a great feeling. I’ve been working on my technique and my steps. It’s yet to come together in a race like this. It’s definitely a confidence booster for the World Youths.”

“He told me that the race is important,” said McLaughlin, “but so is enjoying the experience.”

Much of the focus of the two-day competition fell on Candace Hill, the 16-year-old who recently smashed the world youth best over 100m with 10.98.

“Even though I’ve run faster, it’s still a good time considering I haven’t run the 200m in a while,” said Hill after setting meeting records in both events, having clocked 11.47 in the 100m heats.

“At this competition, you have the best girls in the country, so breaking the meeting records is awesome,” she added. “I want to run 22 seconds wind-legal in the 200m; that’s my goal for the season.”

Following in the footsteps of older brother Noah, who recently won the 100m and 200m at the US Junior Championships in 10.14 and 20.18, Josephus Lyles impressed in the 400m in Lisle.

The 16-year-old was up against Keshun Reed, the second-fastest youth in the world this year with a 45.75 PB, but finished comfortably ahead of his rival to win in 45.77. Reed finished second in 46.06, also booking his spot on the team for the World Youth Championships.

“I tried to stay relaxed and get out hard, especially the back stretch; I pushed the back stretch a little harder than I usually do,” said Lyles, who won gold in the 4x400m at last year’s World Junior Championships. “Keshorn being out there helped push me in the last 100m. Anytime I have a little bit of competition, it gives me the extra edge.”

Rivera, Piperi and Davis at the double

Hill was one of a handful of athletes to pick up two titles in Lisle.

Sophia Rivera went into the last round of the girls’ shot in fourth place, but unleashed an almighty 18.09m in the final round to win the competition by more than a metre, breaking the US youth record with the 3kg implement in the process.

Just moments later, she headed over to the javelin runway and produced similar heroics. This time her best throw came in the fourth round; her 51.60m effort moving her from third to first.

Adrian Piperi also saved his best for last in two throwing events. On Tuesday he won the shot with a last-round effort of 21.06m, taking him to third on this year’s world youth lists.

The 16-year-old was in action in the discus 24 hours later and once again produced the goods with his final throw. His winning mark of 58.80m saw him go from fifth to first.

Tara Davis will also be competing in two events in Cali after completing the horizontal jumps double in Lisle. On Wednesday she led the long jump competition from start to finish, winning with 5.82m (0.0m/s) and on Thursday she won the triple jump with a PB of 12.77m (0.0m/s).

George Patrick posted the top marks in seven of the 10 decathlon disciplines, eventually winning by more than 800 points with a US youth record of 7282, taking him to sixth on this year’s world youth lists.

BACK
Pages related to this articleAthletes
Josephus LYLES 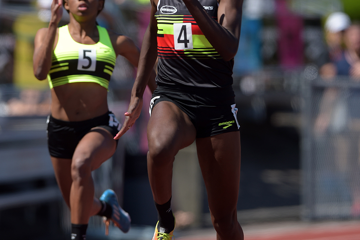