Karsten Warholm produced the second-fastest 400m hurdles performance of all time to highlight action on the track at the Weltklasse Zurich on Thursday (29) as the first 16 IAAF Diamond League champions of 2019 were crowned.

With Warholm, the world leader at 47.12, facing off against Rai Benjamin, the equal third-fastest man of all time, for the first time, the battle was billed as the face-off of the evening. And it lived up to that lofty billing in every imaginable way.

As is now his trademark, Warholm went out strong, jumping to an early lead, forcing Benjamin to either follow or hold back. He seemed to do both over the first 300 metres, catching the Norwegian as the pair entered the final straight. Approaching hurdle nine, Warholm stutter-stepped badly, giving Benjamin an opening to narrow the gap. He did, but Warholm powered on again to rediscover his rhythm on the way to the final barrier, once again chiseling together a lead he held through the finish, stopping the clock in 46.92 to become the third man to crack the 47-second barrier.

Behind him, Benjamin became the fourth, tying Abderrahman Samba as the third fastest of all time in 46.98. Before this year, to run under 47 seconds and lose seemed unfathomable. With the trio of Warholm, Benjamin and Samba still arguably reaching their peak, sub-47 performances could become commonplace.

“It was crazy,” said Warholm, who entered the season with a 47.64 best. “I knew that I would run a good time but this race was just amazing. And the best is yet to come.”

Kyron McMaster, the defending Diamond League champion, was a distant third in 48.58.

The US pair ran nearly even through the first half of the race with local star Lea Sprunger, to their outside in lane seven, also running well. McLaughlin began to pull away midway through the final turn, entering the homestraight with a clear lead. She went on unchallenged to reach the line in 52.85, a season’s best.

“I am absolutely shocked and amazed,” McLaughlin said, “but it was not my cleanest (race) at a couple of hurdles. I need to work on that, especially the first hurdle.”

Muhammad struggled over the waning stages, and was eventually passed by compatriot Shamier Little, who won the battle for third, 53.86 to 54.13.

One of the key showdowns of the evening produced the most fireworks, with Shaunae Miller-Uibo taking down one of the meeting’s strongest fields with an explosive 21.74 performance in the 200m, the fastest in the world this year.

Entering the straight with a narrow lead, Miller-Uibo blasted away from European champion Dina Asher-Smith with about 40 metres to go to take the overwhelming victory with a Bahamian and Diamond League record that elevated her to equal 11th on the world all-time list.

“This is just a blessing,” said Miller-Uibo, who on this evening sported combat green highlights in her hair. “This is my last run before the World Championships. I am in great shape, I’m really excited.” It was the Olympic 400m champion’s third straight Diamond League title in the event and her fourth trophy overall.

Asher-Smith clocked a season’s best of 22.08 in second with Elaine Thompson, the world leader coming in, a distant third in 22.44.

Finest finish of the night? Undeniably the one that propelled Donavan Brazier to his sensational victory in the 800m.

The 22-year-old US champion was a distant sixth with just over half a lap to go, well behind world leader Nijel Amos, who tried to steal the race from the bell. Pacesetter Harun Abda brought the field through the half in a quick 48.23, closely shadowed by Amos who took command when the pacer stepped off the track. Only Emmanuel Korir gave chase initially, but proved no match for Amos who entered the final straight with his trademark grimace splashed across his face.

But behind him, Brazier feverishly made up the deficit, pulling himself into contention with about 50 metres remaining before pulling ahead for good in the final 10. His 1:42.70 performance was his first foray into sub-1:43 territory and was just 0.10 shy of Johnny Gray’s North American record set in 1985, 12 years before Brazier was born.

Dibaba held sway well into the final lap, when Hassan took command with just over 200 metres remaining. The Dutchwoman forged on and pulled away to collect the win in 3:57.08.

Behind her, Konstanze Klosterhalfen closed strong, finishing second in 3:59.02, a season’s best, while drafting Gabriela Debues-Stafford to third in 3:59.59, another national record for the rising Canadian star.

Once again, Beatrice Chepkoech was the class of the field in the women’s steeplechase, the world record-holder taking command from the gun en route to a convincing victory in 9:01.71 after a solo run.

Hyvin Kiyeng and Norah Jeruto closed well, clocking 9:03.83 and 9:05.15 to secure a top-three sweep for Kenya. Gesa Felicitas Krause, who finished fifth, took more than two seconds from her own German record, clocking 9:07.51.

Joshua Cheptegei followed suit in similar fashion in the 5000m, leading for the final kilometre and eventually holding off a three-pronged Ethiopian and Kenyan attack en route to a 12:57.41 win, a lifetime best for the Ugandan.

Noah Lyles inched past world champion Justin Gatlin about 15 metres from the finish en route to his 9.98 victory in the 100m to capture the third Diamond Trophy of his young career, his first in the shorter dash.

Running out of sight in lane nine, China's Xie Zhenye closed well to finish second in 10.04, just ahead of Jamaican Yohan Blake and Gatlin, who clocked 10.07 and 10.08, respectively.

Lyles returned to the track after the competition for a live rendition of 'Souvenir', a song he and pole vaulter Sandi Morris wrote and recorded, along with Swiss pop band Baba Shrimps.

Things did go according to the playbook in the women’s 400m. Salwa Eid Naser produced another dominant performance, making up the stagger midway through the final turn en route to 50.24 win to extend her unbeaten streak in the event to 12 while successfully defending her Diamond League title. The 21-year-old Bahraini finished nearly a second clear of Shakima Wimbley, who clocked 51.21. 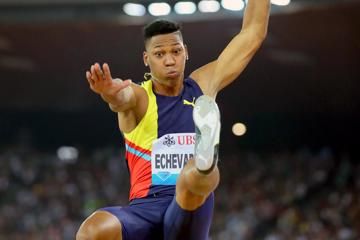