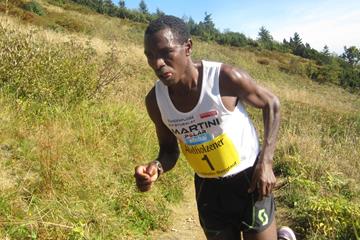 Eritrea's Petro Mamu and Austria's Andrea Mayr reigned supreme in the fifth stage of the 2016 Mountain Running World Cup, the 43rd edition of the Hochfellnberglauf in the southern Bavarian city of Bergen, Germany, on Sunday (25).

The 40 female and 205 male competitors were greeted with ideal weather conditions for the fifth stage of the WMRA series, with the sun slowly rising above the hills on a cold, clear autumnal morning. The event saw athletes flock to Bergen from a record 20 countries to contest the race, which was held on an 8.9km course that featured a 1075m elevation gain.

The opening kilometre took place on ashpalt road, but was covered in a swift 3:35 by the leading men, accounting for the moderate incline. However, the real action got under way in the third kilometre as the lead group was whittled substantially with the course sloping steeply upwards.

On the 'Alm' at 5.5km, where hundreds of spectators were waiting for the runners, the Eritrean duo of Petro Mamu and Yossief Tekle were already alone at the front of the men's race, followed by the Italian, Antonio Toninelli. Mamu ran together with his countryman up until the final kilometre, where a decisive surge decided the race. He came home 12 seconds clear of his compatriot in 42:48, with Toninelli a further 33 seconds behind.

In the women's race, Andea Mayr lived up to expectations and took a decisive victory and after the race, was able to savour the sights on the mountain in a more relaxed setting after being taken back to the valley with Mamu’s coach, a professional paragliding instructor in tandem parachute.

Organisers and Cathal Dennehy for the IAAF