Kenya’s Kipyegon was left thrashing about on the track like a thing possessed after supplementing last year’s Olympic title with a world gold in a women’s 1500m final of dizzying possibilities and drama.

After a stacked field had run cautiously to the bell, Kipyegon was in pole position to earn another global title as she ran alongside the Dutch athlete who leads this year’s world list with 3:56.14, Sifan Hassan, with Britain’s Laura Muir and Ethiopia’s world record-holder Genzebe Dibaba in close attendance.

By the time the field reached the final bend, Dibaba had dropped away but the Briton, roared on mightily, remained in pursuit of a medal until a tumultuous final 20 metres in which Hassan went backwards to fifth as US runner Jennifer Simpson, champion in 2011, came smoothly through for silver on the inside and South Africa’s Caster Semenya, who will defend her 800m title here, just moved past for bronze before staggering and falling at the line.

"I knew it would be fast, it is such a quality field,” said Kipyegon. “The best was going to win here. It was always going to be quick and competitive.”

Simpson commented: "My coach has been telling me all day, 'Be willing to run your guts out and you'll be great', so I did exactly what she did. The last 300m in particular I ran my guts out and it paid off.

"Having the experience is huge because having the ability to stay calm is so hard, especially at the world championships when you're racing in a beautiful stadium like this. To come out with a medal, I think it was down to keeping my wits about me."

Muir, who finished two places off the podium after going for broke at last year’s Olympics, also went down after the finish, lying on her front and contemplating the bitterest of positions. She had missed a medal by seven hundredths of a second.

Asked for a response by the infield MC, Iwan Thomas, she responded: “Er.. yeah. Fourth. Fifth last time, fourth now so – I’m getting there…”

Two centimetres were enough, eventually, to effect a shift in power at the top of women’s triple jumping as Colombia’s 33-year-old world and Olympic champion Caterine Ibarguen was deposed by her exuberant 21-year-old rival Yulimar Rojas, who claimed an historic gold for Venezuela with a best of 14.91m.

Venezuela have their first ever world champion! Watch how Yulimar Rojas took gold at the #IAAFworlds pic.twitter.com/Bzl6pvdC00

As the defending champion’s final effort was revealed as being 14.88, Rojas – who took Olympic silver behind the Colombian in Rio – turned into a jumping jack as the realisation that she had finally bettered the woman who has been virtually unbeatable since taking silver in this arena at the London 2012 Games sank in.

"I am so proud about this gold medal,” said Rojas. “My family, my friends and my country - I made them proud and full of joy. I am sure they will be celebrating and having a party.

"Yes, the last attempt of Ibarguen was hard for me, I feared her last attempt, I was afraid that I could lose my gold medal there. But fortunately that did not happen.”

Ibarguen offered a brief embrace before exiting stage left. Finally, It was the moment for Rojas to take centre stage after delivering Venezuela’s first gold medal in the World Championships, and only their second following yesterday’s shared bronze in the pole vault through Robeilys Peinado.

Meanwhile Kazakhstan’s Olga Rypakova, who denied Ibarguen Olympic gold here five years ago, was celebrating bronze thanks to a season’s best of 14.77.

Jamaican flags swirled in triumph for the first time at these IAAF World Championships as, after the disappointment of Usain Bolt failing to complete his individual sprinting career with another global gold, and Olympic 100m champion Elaine Thompson missing a medal in her final, Omar McLeod won the 110m hurdles with faultless aplomb.

The 23-year-old Olympic champion, who is based in the USA and is coached by Edrick Floreal, who also guides the career of women’s 100m hurdles record-holder Kendra Harrison, was full of emotion after finishing in 13.04.

“I dedicate this win to Usain Bolt’s retirement,” he said. “I really wanted to come here and keep the Jamaica flag high. We lost Usain’s name, but he is still legendary.”

Defending champion Sergey Shubenkov, running under a neutral banner, produced a characteristically gutsy and technically assured run to claim silver in 13.14, ahead of Balazs Baji of Hungary, who clocked 13.28.

Five years after taking Olympic gold here, world record holder Aries Merritt – back to something like his best after having a kidney transplant at the end of 2015 – finished fifth in 13.31.

Poland’s Anita Wlodarczyk, who turns 32 tomorrow, helped herself to an early birthday present as she claimed a third world title to add to the golds secured at the last two Olympics – despite having a finger injury.

“I injured my finger during the first training session in London and it was quite painful,” she explained after winning with a best of 77.90m that was some way down on her world record of 82.98m. “And I started to have cramps tonight. So it was not easy and I am very angry about myself.

"So this was not the performance I expected tonight - but come on, I am the world champion!”

Wlodarczyk, who admitted she had been nervous about her injury, took a little time to find her range in the women’s hammer final – but once she threw 77.39m in round four it was game over, and  she improved again in round five.

China’s Wang Zheng, with a 2014 personal best of 77.68m, made a huge effort to catch her with her final throw, confirming her silver medal position with 75.98m. Bronze went to Wlodarczyk’s compatriot Malwina Kopron thanks to her first-round leading effort of 74.76m.

Britain’s Rio 2016 bronze medallist Sophie Hitchon saved her best until last, but 72.32m was only enough for seventh place.

Van Niekerk through to 200m semi-finals

Wayde van Niekerk’s prospects of securing a 200/400m double here are looking even better after the 200m first round heats - while the world and Olympic 400m champion won easily, his big rival Isaac Makwala of Botswana, who also qualified for tomorrow night’s 400m final, abandoned his own original ambition of seeking a 200/400, scratching from his heat. (See statement on Makwala DNS.)

As expected, Van Niekerk, in lane seven, was victorious, clocking 20.16 without overextending himself, finishing just a thousandth of a second ahead of Britain’s Danny Talbot, who set a personal best.

Trinidad and Tobago’s 23-year-old Jereem Richards was fastest qualifier in 20.05, with second fastest being Britain’s Nethaneel Mitchell-Blake, who clocked 20.08.

Defending men’s triple jump champion Christian Taylor required just one leap to qualify for Thursday’s final, reaching 17.15m, 15cm beyond the automatic qualifying mark and the second furthest of the night behind the 17.20m registered by team-mate Chris Benard.

The third US contender Will Claye, who has taken Olympic silver behind Taylor in 2012 and 2016, progressed with 16.95m, with Cristian Napoles of Cuba being the only other automatic qualifier with 17.06.

Allyson Felix of the United States, seeking a tenth world gold medal at the age of 31, 12 years after taking her first over 200m in Helsinki, reached Wednesday’s 400m final by finishing second in her semi-final in 50.12 behind 19-year-old Salwa Eid Naser of Bahrain, who set a national record of 50.08. Olympic champion Shaunae Miller-Uibo accompanied them with the third fastest time of the day, 50.36. 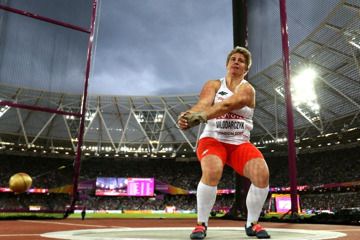 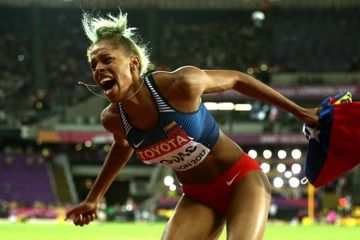 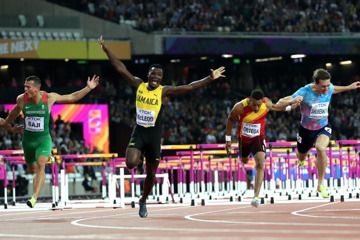 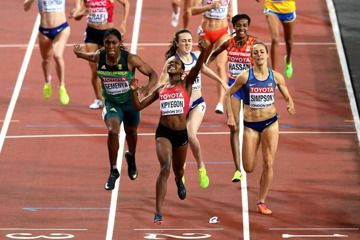