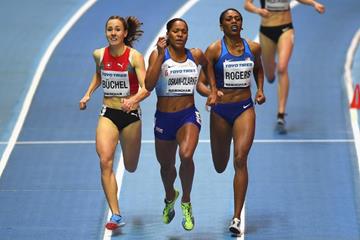 With just the winner guaranteed a spot in Sunday’s final, the three women’s 800m heats were always liable to be brutal, cut-throat affairs. The most notable victim was Margaret Wambui in heat three.

On the final 200m lap, the Kenyan who claimed Olympic and world indoor bronze medals in 2016 was unable to close the gap on defending champion Francine Niyonsaba of Burundi, who clocked the fastest winning time, 2:00.99. Still, Wambui would have progressed as a non-automatic qualifier had she not been disqualified for a lane violation.

Jamaican champion Natoya Goule, who had cut out the early pace, was promoted to runner-up but 2:02.49 was not quick enough for her to join Niyonsaba in the final.

The other notable victim came in the opening heat. Ajee Wilson, the smooth-running US athlete who took silver behind Niyonsaba in Portland two years ago, controlled the race from the front, prevailing in 2:01.90.

There was an almighty scrap for second place, Ethiopian record-holder Habitam Alemu edging out Poland’s European 1500m champion Angelika Cichocka by 0.07 in 2:02.18. The margin was to prove decisive, Alemu taking the third and last non-automatic qualifying slot. A finalist at both 800m and 1500m at the outdoor IAAF World Championships in London last year, Cichocka was left out in the cold.

The other two non-automatic qualifiers came from heat two. British champion Shelayna Oskan-Clarke made what proved to be the decisive move, hitting the front with 150 metres to go and maintaining her kick to claim victory in 2:01.76.

Switzerland’s double European indoor champion Selina Buchel pushed hard down the home straight and second place in 2:01.84 was enough to take her through. US collegiate champion Raevyn Rogers, third in 2:02.17, also progressed.