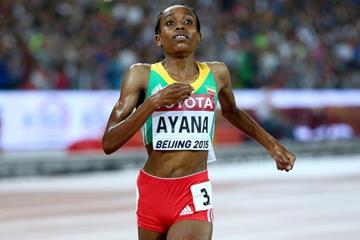 Almaz Ayana produced one of the outstanding moments of the year when setting a world 10,000m record en route to striking Olympic gold in Rio. She was later honoured for her achievements when named the 2016 Female Athlete of the Year. Here the Ethiopian ponders our first impressions questions.

It was teacher Lemma Haffa. He pushed me to work hard and offered plenty of advice during my early days involved in the sport.

It was a school race back in 2007. The memories I have of that race is that a competitor pulled me from behind and I fell to the ground. I didn’t win the race, so I don't have good memories of it!

It came in 2013 with Ethiopian television. I learned many lessons from this about how to give an interview. I didn't see the interview, but I read about it on social media. I talked about my performance and my training, which is about hard work and commitment.

I competed in a 3000m steeplechase race in Bambous, Mauritius in 2009. I fell down in the middle of the race, so I don’t have a good memory of that race. I finished second but If I had not have fallen, I would have won the race. Mauritius was very nice. A beautiful place for recreation and tourism.

Athletics is my first sport. I did not do any other sports before athletics.

That was the bronze medal I won over 5000m at the 2013 IAAF World Championships in Moscow. I have good memorIes of this race, because I did not expect to win a medal. I was so happy to climb the podium.

This came at the 2011 All-Africa Games in Mozambique. I was supposed to run the 3000m steeplechase but I could not due to an unexpected pain in my leg. The injury or pain quickly cleared but, unfortunately, I missed out on competing in Mozambique. This was my first athletics injury and also I am glad to say my last.

It was Tirunesh Dibaba (Ethiopian distance running star). She won a number of medals at her early age with remarkable performances and always has a smile on her face in every race. A favorite race of mine was watching Tirunesh win the 10,000m gold at the London 2012 Olympic Games.

Per my culture, I started to prepare coffee and injera (a sourdough risen flatbread) at an early age, I was aged about nine or 10. My mother was the one who taught me to cook. Today I can cook some very good Ethiopian dishes.

My first car was a Toyota Corolla, which I bought in 2013. I drove the car for two years. It was a reliable car.

My family had a dog named Buchi. The memory I have for Buchi is that it was a very reliable guard dog to our home in the countryside. It didn't like any guests arriving at our home unless the guest was with a family member.