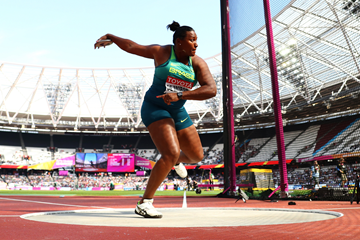 Brazilian discus thrower Andressa de Morais has enjoyed a breakout season in 2018. The South American record-holder says her second-place finish at the IAAF Diamond League final was her career highlight, while a difficult period after the 2012 Olympics was a low moment.

The entire 2018 has been a glorious year but the highlight was finishing second at the Diamond League final in Brussels.

During the preparation period for the 2018 outdoor season, I changed a few elements in my training. With my coach (Julian Baloy Mejias Silva) I worked more on my speed in the circle. This made me feel lighter and faster in the circle and led to much improved results.

This season was also different in terms of the competitive planning. In 2018 I had a much greater idea of where I was competing. This allowed for much better preparation whereas in past seasons I would return to light training during the course of the season and miss out on heavier work.

Breaking the South American record (with 65.10m in Braganca Paulista in July) was very special but what makes me more proud that I was able to perform so well in the Diamond League final.

At the beginning of the competition I made some technical mistakes (De Morais failed to achieve a mark beyond 60 metres with her first four throws) but I understood the errors I was making, I kept calm and I corrected them. In round five I threw 62.16m before I unleashed 64.65m in round six for second behind Yaime Perez (65.00m).

I was very happy with the performance until I saw the video a few days later where I was surprised and a little sad because I also threw 65m. No matter the outcome, I was very happy to be up there with the very best in the world.

My low period came after the London 2012 Olympics (De Morais placed 15th in qualification). Later that year I underwent surgery for a cyst on my ovary and that forced me to take three months out from training from November through to January 2013. Then later that year I picked up a hernia. For May and June of that year I managed to handle the pain until it became too much. I called a premature end to the season and missed the World Championships in Moscow.

I decided not to have surgery and rest but in 2014 I was at my lowest ebb and felt like quitting the sport. I had been away from training for such a long period my results both in training and in competition were really poor.

If it wasn’t for my husband (Everton) I would have walked away from the sport. He was the one who encouraged me and motivated me every day. He told me not to give up and it was thanks to his total support that I fully committed to continuing in the sport in 2015.