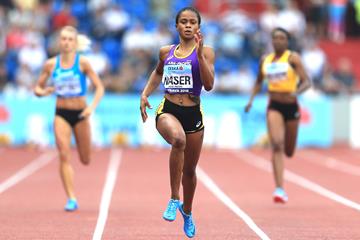 One-lap star Salwa Eid Naser has enjoyed a stellar 2018 campaign, winning the IAAF Diamond League 400m title and Asian Games gold medal. The 20-year-old athlete from Bahrain achieved her career high earlier this year, while her misfortune at the Rio 2016 Olympic Games was something of a low.

Setting a national record of 49.08 at the 2018 Monaco Diamond League meeting was my high moment.

I went into that race full of confidence and I remember saying in the pre-event press conference that I was not afraid of anyone and that every time I stepped on to the track I expected a PB.  I was really hoping to push Shaunae (Miller-Uibo, the Olympic champion) and get a great result.

I often have very vague memories of races. I’m just absorbed in the flow of the race.

As I crossed the line, I was excited because I had pushed Shaunae close. The last time we had raced (in Brussels in 2017 when Miller-Uibo triumphed from Eid Naser by 0.42), the gap between the two of us was greater. This time it was much closer and I felt very proud of myself stepping off the track, particularly when you consider how young I am.

Unusually for me, I was not aware of the time I had run (a national record of 49.08 – 0.11 behind Miller-Uibo who had set a Bahamian record) it was only in doping control when someone told me that I had run 49.0 – it was like...wow!

For me, although I had lost the race, it felt like a win for me. My coach Jose Rubio was so happy I was so close to 48 seconds. I know if I work really hard that it (48 seconds) will come in the future.

My biggest low came when I was eliminated from the semi-finals of the 400m at the Rio Olympics when my expectation was to reach the final.

Just a week before the Olympic Games I was walking down the stairs when I twisted my ankle. The incident triggered a weakness I had in my left ankle since I was young and it opened up a fracture.

My ankle was first weakened after I was struck by a car aged six. I recall I had bought an ice cream but I had forgotten my change and as I ran across the road to retrieve it, that’s when the car hit me.

I was given ultrasound on the injury and advised not to compete but this was my first Olympics and I wanted to race. I did not want to have regrets, so I took to the start line but because of the injury I was not at my best.

Despite the injury, I won my heat (in a national junior record of 51.06) and although I set a PB (of 50.88) in the semi-final, I finished third and failed to make the final by one place. During the race I did not feel too much pain, although post-race I was in intense pain and after Rio I had to take three months rest to treat my leg.

It was really emotional for me after the race. I cried all night and I remember my mum had to say some nice and sweet words to make me feel better. Thankfully, it did not take too long for me to recover from the disappointment. I am a Gemini so I adapt to things quickly and take on an attitude of whatever happens, happens.