Double world indoor 60m champion and two-time world 4x100m champion Bruny Surin was one of the star sprinters of the 1990s. Here the Canadian 100m record-holder offers his assessment on the make-up on his all-time men’s 4x100m quartet.

I put Maurice Greene on leg one. For the first leg, you need someone with a good start and as he is still the world indoor 60m record-holder, he would make sure the team got away well. Maurice is also a former world 100m record-holder.

Back in my era he would bring a psychological edge. Probably 99% of the time I raced him, he would be ahead over the first 10, 20, 30 metres. He would produce a big lead-off leg.

On leg number two, also known as the long leg, I would go for Usain Bolt. As the world 100m and 200m record-holder, I don’t see anyone who could touch him; he has the start, the power, everything you would want as a sprinter.

The first time I became aware of him was a few weeks before he broke his first world record in New York (in 2008). He had run a very quick time in Jamaica (9.76) and a lot of people were calling it a fluke. I watched the race back many times and I even timed the race myself. It was legitimate. I then knew he was not only going to compete in New York, but I was 100% sure he would break the world record there. Most of my friends said this was not true, but I drove down to New York myself and witnessed the world record (Bolt ran 9.72 in New York).

What struck me from the start was I thought he would be three of four metres behind at 60m because of his height, but he was well up there for a tall guy. That surprised me. What also surprised me is that during warm he was not even focused, and he was cracking jokes with his buddies. He has gone on to be a great ambassador for the sport.

Jesse Owens in action in the 4x100m

I would put Jesse Owens – another legend of the sport – on leg three. He can clearly run a good bend as he is a former Olympic 200m champion and to think what he achieved back then on a cinder track is pretty crazy. To win those four gold medals in the context of those Berlin Games would definitely put him in my dream team.

I watched the movie of him, which was released last year, and I was very moved by his story. Putting together an all-star team, Jesse has to be included and if he was racing on today’s tracks, I’m sure he would be capable of running 9.8 for the 100m.

I would put Carl on anchor because he was always a great closer in his races. I recall when he won the gold medal in a world record time at the 1991 World Championships in Tokyo, he did so with a late surge in the final metres. To put him on anchor I know he is going to stay focused, not tie-up and he also has the ability to catch anything in front of him.

It was not only the medals and the world records that made Carl so great. He had a certain aura about him. He was charismatic and occasionally cocky, but all the time he backed it up with his performances on the track. He was the guy who got me into track and field, the complete package as a sprinter/jumper. The fact he was still winning Olympic gold medals in 1996 – 12 years after winning his quartet in Los Angeles – meant he enjoyed an incredibly long career at the top.

BACK
Pages related to this articleAthletes
Bruny Surin 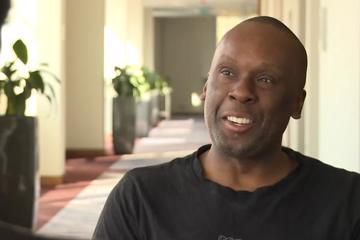 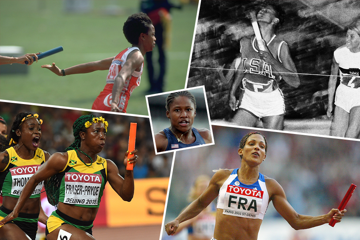