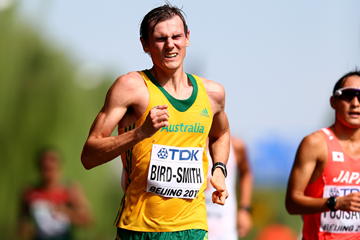 Olympic 20km race walk bronze medallist Dane Bird-Smith has been a man on the rise for the past few seasons. Here the Australian reflects on a pivotal moment which changed the whole course of his career.

“My greatest challenge came in 2012 when I was a junior transitioning to becoming a senior athlete. I desperately wanted to make the Australian team for the London Olympics, but I finished fifth at the Australian Championships and just missed out.

“Shortly afterwards I went up to Cairns and was at a party. This was when I first met my fiancée, Katy. I remember chatting to her about athletics, and although she was not from an athletics background, she asked me what I was doing and my motivation for competing in the sport. She asked me why I wanted to be an Olympian and how do you become an Olympic medallist. I wanted to answer, but I couldn’t.

“She then said, ‘Of course, everybody wants to win a medal’. Her comments got me thinking – I was nothing more, at the time, than an Olympic dream chaser. I would sort of turn up and hoped it would happen. I wanted to achieve these goals but I wasn’t prepared to make the sacrifices that went with it.

“I took a hard look at myself. I needed to cut out the parties and the social life. If I wanted to be the best in the world, I had to want it more than anybody else. At that point I said to my father and coach (David), ‘it’s four years until the Rio Olympics. I don’t just want to make the team; I want to compete there, become the fastest ever Australian and win a medal’.

“For the past four years, I’ve managed to make a steady progression each year and improve my PB. I’m finding every single year there are components I can tick off and say, ‘I’ve got that now’. It has been a whole process of trial and error to find out what works. I have to remind myself not to get side tracked. If that happens, even for a week or two, I know it can cost you when it comes to the major championships.”