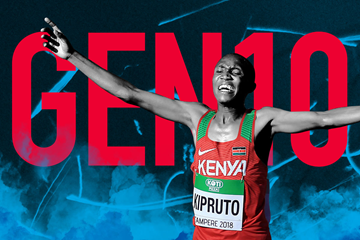 The Kenyan was still pretty much an unknown as recently as February 2017 when he lined up for the Rift Cross Country Championships in Mosoriot, but he placed third in the U20 race, finishing just 11 seconds behind world U18 3000m champion Richard Yator.

He missed out on a team spot for that year’s IAAF World Cross Country Championships but he soon turned his attention to the track and clocked 28:56.5 on his 10,000m debut, putting together a string of domestic victories.

It was on the roads, though, where he made his first big impact. The 2017 Birell Grand Prix, a 10km road race in Prague, was Kipruto’s first overseas race. He finished just three seconds behind the winner in 27:13. His time would have been the fastest ever 10km run by an U20 athlete were it not for the fact that his training partner Mathew Kimeli, also U20 at the time, finished just two seconds in front.

Kipruto didn’t mind, though. He had found a surface he loved racing on and was fast becoming aware of his ability.

His 2018 season started with a brief cross-country campaign, during which he won the African U20 cross-country title in Chlef, finishing comfortably ahead of compatriot Stanley Mburu Waithaka.

Six weeks later, he gained further attention overseas when winning the UAE Healthy Kidney 10-K in New York. His time, 27:08, was the fastest ever by an U20 athlete, a US all-comers’ record and moved him to fifth on the senior world all-time list. His 8km split of 21:45 was also the fastest ever recorded for that distance on a record eligible course.

Kipruto took a brief break from the roads during the middle of the year to concentrate on the track. He did more than enough to book his spot on the Kenyan team for the IAAF World U20 Championships Tampere 2018, winning the national trial race by nearly 30 seconds in 27:49.6 at altitude.

He knew the race in Tampere wouldn’t be quite so easy, though, as he was up against world U20 cross-country champion Jacob Kiplimo of Uganda. And indeed it was close – for the first six kilometres. After then, Kipruto took off and could not be caught, eventually winning in a championship record of 27:21.08.

The 18-year-old closed with a 13:23.86 second half, a performance that would have powered him to victory in all but four of the 16 previous 5000m title races contested at the World U20 Championships.

He wasn’t done for the year, though. Two months later, Kipruto returned to the scene of his first race outside Kenya. He didn’t just want to win the Birell Grand Prix; he wanted to run fast.

He did exactly that. In what was largely another solo run, Kipruto clocked 26:46 to record the second-fastest 10km of all time on a record-eligible course. His time was an agonising two seconds outside Leonard Patrick Komon’s world record.

Kipruto was pleased with his effort, though. “I’m very satisfied,” he said after what was just his third race over the distance. “I was the only one pushing it. No one assisted me.”

His preparations for 2019, his first year in the senior ranks, are already underway and he has recently won a couple of high-quality domestic cross-country races in Kenya. He will no doubt start as one of the favourites not only for the IAAF World Cross Country Championships Aarhus 2019 but also the IAAF World Athletics Championships Doha 2019.

Not forgetting, of course, that he may make a few appearances on the roads in between those two major championships. The world will be watching.

1. Grass is best. He can run well, brilliantly well in fact, on track, road or cross. But which one does he prefer?
“Cross Country is my favourite,” he says. “I will be running the World Cross Country Championships in March.”

2. But he hasn’t run on a lot of mud yet.
This year’s African Championships has been his only international cross-country championship to date, so Aarhus will be interesting for him.

3. His role models are Eliud Kipchoge and David Rudisha.
“I have learned a lot from them,” he says. “They are superstars and they do their job well and that’s why they inspire me.”

4. He’s not ready to run marathons. Yet.
Having come within a couple of seconds of the world 10km road best, Rhonex is not looking to overstretch himself. “I am still concentrating on the track and 10km road runs.”

5. He believes Kipchoge’s marathon record will not stand forever.
“There will always be a new challenge. It depends on the determination of the athlete and positive thinking about it. Any of the athletes might break it. Maybe I will.”

6. He isn’t conservative in his ambitions.
“I want to make the team for the World Championships next year, and then to break the world record for 10km on the roads.” Well he’s already only two seconds off it…

8. The best advice he has been given is…
“Be disciplined and focus on what you are doing.” Well you can’t argue with that, can you?

9. He speaks quietly and precisely
Rather like his idols Kipchoge and Rudisha, in fact.

10. We’re going to be seeing him soon in the IAAF Diamond League.
“I’m going to be running some 5000m races next season.”