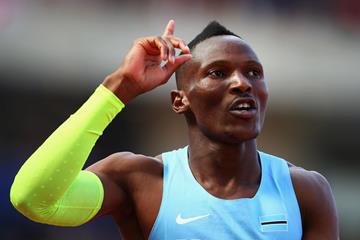 He was also in action at the weekend at the IAAF/BTC World Relays, Bahamas 2015, where he helped Botswana make the final of the 4x400m and qualify for the Rio 2016 Olympic Games.

We chat to Makwala to find out more about his life.

It was when I represented Africa at the 2014 IAAF Continental Cup in Marrakech. I finished second in the individual 400m and helped Africa win gold in the 4x400m and that was a big moment for me because I was not only representing my country, but my whole continent.

So far my biggest disappointment was the 2014 Commonwealth Games. I went to Glasgow as the second fastest in the Commonwealth for the 400m, behind Kirani James, so to fall short and not even make the final was a big disappointment. (Makwala found the cold conditions in Scotland not to his liking and he exited at the semi-final stage).

The 400m has such a tradition in America it is almost as if the event was born there, so I know because LaShawn is American I will always get the toughest of opposition. I'm yet to beat him, but I hope 2015 will be a lucky year for me.

I would say my fellow Botswanan Nijel Amos (Olympic 800m silver medallist). We know each other well from travelling the Diamond League circuit. He is a good guy, a funny guy and we often share a room together at major championships.

My coach, Justice Dipeba, sends many motivational messages to me. One of my favourites is 'champions are not born, champions are made'. I like this because he is saying anything can be achieved through training hard and hard work.

The best athlete you've ever seen

I would have to say the greatest athlete in the world is Usain Bolt because he is the world record holder of the 100m and 200m and he has broken those records many times.

I used to train with Usain in Jamaica and although he was not as strong as his training partner Yohan Blake in practise, when it came to the competition Usain was so good.

In athletics, I don't know my weakness so far. Maybe, I have a weakness for not doing warm-ups as well as I should.

I don't listen to music. I just sleep and then go to the track.