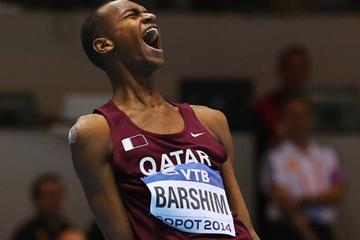 High jumper Mutaz Essa Barshim secured bronze and silver medals at the 2012 Olympics and 2013 IAAF World Championships respectively before climbing up to the top step of the podium earlier this month at the 2014 IAAF World Indoor Championships.

The 22-year-old Qatari, who holds the Asian record indoors and outdoors, is next up to try our work, rest and play questions.

Mutaz Essa Barshim: Firstly, the competition. I’m a competitive guy when it comes to sports and that is something I really like. Secondly, having fun, which means a lot when I train and compete. Thirdly, the other thing I enjoy is being able to make the most of the talent that I was given.

Do you have a favourite training session?

Do you have a least favourite training session?

MEB: The conditioning period at the start of the season because you have to train long and hard. That is the worst.

MEB: I love training at home in Doha at the federation track. To me, it is always home. I’ve trained there since I was a kid and it is somewhere I feel I belong.

Do you have an all-time favourite training partner?

MEB: I’m not really a group guy, so myself. Me, myself and I (laughs).

MEB: At home. When I come home, I relax with my family and chill.

What is your perfect day without training?

MEB: I like to do nothing. Maybe, grab some mixed peanuts and fresh juice and watch cartoons.

What is your favourite TV programme?

MEB: I like comedy shows. I also love Naruto, a Japanese animation show.

If you could pick one athlete to spend the day relaxing with, who would it be and why?

MEB: I like Artur Partyka (who won Olympic silver and bronze medals in the 1990s), the Polish high jumper. We are really good friends and we speak with each other a lot.

What is your favourite meal?

When did your passion for movies start?

MEB: It started around the age of 14. It was at this age that I started to travel a lot and that’s when I began to download movies every day and watch them.

What was your favourite movie as a child?

MEB: That was You Get Served. I thought it was cool and I loved the dancing in it.

What is your favourite style of movie?

MEB: I love comedy, documentaries and action movies but I don’t like horror movies at all.

What is the last movie you saw?

MEB: It would be Head of the State with Chris Rock and Bernie Mac. I really like both of them.

Who is your all-time favourite actor?

MEB: Eddie Murphy, for sure. He’s a living legend. Nobody can do it better on screen than him. He really makes me laugh.

Which actor would play Mutaz Essa Barshim in your life story?

MEB: I think Usher Raymond, he looks like me and I think he would have my style.

Which track and field athlete would make the best actor?

MEB: I think Jaysuma Saidy Ndure, the Norwegian sprinter. He’s so funny he could be a comedian.