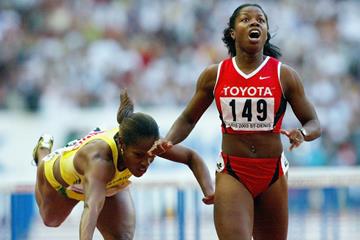 A couple of weeks before the 2003 IAAF World Championships in Paris, the powerhouse Canadian performed with distinction to take a Pan American Games 100m hurdles silver medal, just 0.03 behind Jamaican Brigitte Foster-Hylton.

Running from lane one and still a collegiate athlete at the time, Felicien was satisfied with her podium finish when mum, Cathy, offered a blunt assessment of the performance in Santo Domingo in the Dominican Republic.

“She told me, ‘Perdites, if you had just leaned at the line you could have beaten Brigitte’,” recalls Felicien. “In Paris it was on the forefront of my mind to lean.”

Acting on her mum’s words in the Stade de France was to prove the difference as the woman from Pickering, Ontario caused a major surprise to reverse the Pan American Games result and strike gold. It was some story.

A gifted schoolgirl athlete, Felicien went on to attend the University of Illinois at Urbana-Champaign but her athletics journey was to take on much more clarity after making her IAAF World Championship debut in Edmonton 2001.

“As a college athlete in 2000 and 2001, I was just going through the motions,” says Felicien, an academic high-achiever. “But after missing out on the 100m hurdles final (at the 2001 World Championships) I was very annoyed.

“I’d previously been cheating myself and coasting on ability, but to be so close to a World Championship final made me believe, and I left Edmonton feeling really motivated. It was a real awakening.”

In 2002 she emerged a different athlete winning the NCAA outdoor and indoor titles for the 100m hurdles and 60m hurdles titles, respectively.

The following year Felicien and her coach Gary Winckler set the Paris World Championships as the long-term goal but to peak in August after a long US collegiate indoor and outdoor campaign would require careful planning. Felicien retained her NCAA 100m hurdles crown running 12.74 (she ran a PB 12.68 in the semi-finals) but Winckler diligently managed her competitive schedule to keep her fresh.

She later snagged that Pan American Games silver medal before posting a PB of 12.67 to win the B race in Zurich in what was her final pre-World Championship outing. She arrived in Paris in tip-top condition but harboured realistic expectations.

“I had designs on making the final but a top five place would have been like a gold medal for me,” she says.

Yet after enjoying a pair of highly promising runs during the rounds – she won her first round heat in 12.70 and a drama-packed semi-final in 12.68 in which pre-event favourite and three-time world champion Gail Devers failed to advance – her expectations changed.

“I realised I could be on the podium,” she says, “although I wasn’t thinking gold. I didn’t think I could slay goliath in my first (global championship) final.”

Goliath in Felicien’s eyes was Foster-Hylton, the fastest qualifier and Pan American champion. Aged just 22 at the time and with precious little championship experience, the Canadian admitted she was fascinated by the Jamaican and in Paris watched and studied every step of her warm up routine.

However, ahead of the final Felicien saw in Foster-Hylton a look which would liberate her in the medal race.

“I saw the weight of expectation on Brigitte’s face, she knew her time had come,” explains the Canadian. “I said to myself, I don’t have this pressure. That is to my advantage.”

Never a great starter, Felicien got away better than usual and by hurdle three she held a slight lead from Miesha McKelvy-Jones of the US on her inside before “the yellow blur of Brigitte’s uniform” loomed into view.

By hurdle seven Felicien now in “unchartered territory” held a slight advantage from the Jamaican, but the 1.65m tall Canadian knew she faced a formidable challenge to repel Foster-Hylton.

“Brigitte and I were in a “death match” but I if I was going to hang on to this lead I’d need to be ahead off the last hurdle. I was an 11.5 100m sprinter but Brigitte could run low 11s.

“When you are running a hurdles PB (which Felicien was to go on and achieve) it feels like you are running downhill and you are going to fall flat on your face,” she explains. “You instinctively want to back off, but you need to put your foot on the gas and let it rip. Of course, you risk clipping a hurdle and coming to grief but that is the gamble.”

Coming off hurdle ten “across the minefield with no more bombs to go off” she recalled the words of her mother to throw herself across the line and lean. Felicien flashed across the line in 12.53 – 0.04 ahead of Foster-Hylton – to become Canada’s first female world champion.

“To win was beyond my wildest dreams,” she adds.

The performance instantly elevated the Ontarian into a household name in native Canada but her victory in Paris was to prove her career highlight. Running even quicker in 2004 - she landed the World Indoor 60m hurdles title in Budapest and set a 100m hurdles national record of 12.46 in Eugene - Felicien was strongly tipped to strike gold at the Athens Olympics. However, disastrously she crashed out at the first hurdle and exited the final.

“Athens will always be the one that got away,” she laments. “It will always be devastating to reflect on. However, although my Paris and Athens experiences are polar opposites neither of them define me. The only thing that matters is who I have become because of that.”

For several seasons Felicien struggled both physically and also from the mental scars of Athens before bouncing back to take what she terms “her medal of honour” with a World Championship silver medal behind Michelle Perry in 12.49 – the joint second quickest time of her career – in 2007.

“I was absolutely elated,” she recalls. “Osaka was the first time I’d felt like myself since the starter called us to our blocks at the 2004 Athens Olympics. I was battling anxiety so to win a medal was as good as a gold to me.”

As her injury woes deepened success became less frequent. She won a World Indoor 60m hurdles silver medal in 2010 but failed to qualify for the Beijing and London Olympics and retired from the sport aged 33 in 2013.

However, it was missing the 2008 Olympics Games through injury, which was to present an unlikely new pathway for her post-athletics career. Invited by the Canadian Broadcasting Corporation to act as pundit she revelled in the role and vowed to one day make it her vocation.

She proved as good as her word, going through journalism school and working as a sports reporter for CBC. Today working as a freelance reporter out of her home city of Toronto she has covered not only athletics but a whole range of other sports from basketball to golf and winter sports and believes the role acts as a perfect substitute for her track career.

“Many athletes may not admit it but the adrenaline rush and attention you receive for being famous is an addiction,” says Felicien, who married sports writer Morgan Campbell in June. “But after retirement many still look for that hit. I’m lucky in that I get a similar kick (as I did as an athlete) out of being a sports reporter.”

In fact, Felicien who will be working as a TV reporter for CBC at the forthcoming IAAF World Championships in London believes her rollercoaster track experiences provide a perfect foil for her current role.

“I’ve had the high and the lows in my career which means there is nothing I can’t relate to as a broadcaster. I consider that a badge of honour.”