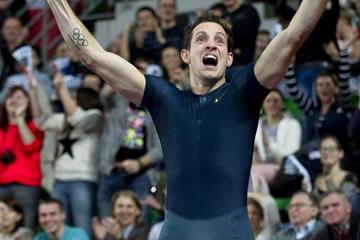 Lavillenie: "I really think my goal can be to beat the world record" – IAAF online diaries

“Hi everybody! I am glad to give you some news after this great season's beginning! As you know, I have already improved my personal best twice and I feel that it is far from being over.

“It all started at the meeting of Rouen (in the west of France) on 25 January. I cleared 6.04m on my first attempt there, then I made three attempts to clear 6.16m, but without success.

“When I cleared 6.04m, I felt very well. It was easy and I did not make any technical mistakes. It was one of the most beautiful vaults of my career, it was comparable to what happened last year when I cleared 6.01m at the European Indoor Championships.

“After the meeting, I could not get to sleep. I came back to the hotel at 1.30 in the morning. At 3am, I watched the videos of my vaults. At 6am, my eyes were still open! Everything that happened during the competition was in my head.

“The meeting of Rouen was the fourth competition of the Perche Elite Tour. It is a French ‘tour’, which is open to all pole vaulters, whatever their level. The great concept is: a competition all day long in the same room, with kids at the beginning and elite athletes at the end.

“It is very interesting because it allows a gathering of all the pole vault family. We all share the same passion and the same challenges every day.

“It is amazing to offer such a show to kids! I was like them before, and I want to motivate them. They can learn by watching us. We can make future champions in this way.

“I then went to Bydgoszcz in Poland. I took on a new dimension by clearing 6.08m. It was easy, almost effortless. The bar did not shudder. It really pleased me. The public was exceptional. Just like in Rouen, I used a 14.3 pole. I used the right equipment at the right time. I managed to set up everything well. Besides, I am not in great shape yet.

“From now on, I really think that my goal can be to beat the world record, but the priority is to be regular above six metres.

“I would also like to thank the Pole Vault Summit organisers in Reno, Nevada, over in the USA. I had already found out that this competition was amazing last year. It was the same this year, last month, even if I had to content myself with ‘just’ 5.75m. I was made very welcome over there. Everybody came to thank me and the spectators were very enthusiastic.

“There were eleven jumping pits and more than a thousand pole vaulters in the hall. All the American people seem to be fans of pole vault. We were mixed with kids and it was pretty extraordinary. Solidarity is one of the beautiful things about our sport!

“See you for now, but I cannot wait for the World Indoor Championships in Sopot next month!