In many ways, 2019 wasn’t the easiest of years to make a breakthrough in the 400m hurdles.

Standards were at an all-time high with Karsten Warholm and Rai Benjamin piecing together the two greatest season campaigns ever, topped by the pair finishing inside 47 seconds at the Diamond League final in Zurich.

Abderrahman Samba, the event’s leading exponent in 2018, had to miss most of the season but was still a formidable opponent in the races he contested.

In a crowded market, there was barely any room for more talent. But, unfazed, Brazilian teenager Alison dos Santos produced a breakthrough campaign that in many previous seasons would have resulted in a global championships medal.

Between April and September, Dos Santos revised his PB – and the South American U20 record – on seven occasions, capping his season with a 48.28 clocking to finish seventh at the World Athletics Championships Doha 2019.

His time was 0.07 faster than Warholm’s winning mark at the 2017 World Championships. In Doha, and in what proved to be one of the greatest depth 400m hurdles race in history, Dos Santos was just 0.25 shy of the bronze medal.

“I was very happy to be in the World Championships final as a 19-year-old and to share the track with three of the world’s fastest men in history,” he said. “I saw it as an opportunity for me to improve my own performance.”

His season as a whole reflected his racing style: a cautious start before getting into his stride and then finishing with a flourish.

His first PB of 2019, 49.48, came during an early-season racing stint in California. Back in Brazil nine days later, he smashed through the 49-second barrier for the first time, winning at the World Challenge meeting in Braganca Paulista with 48.84.

It was then that he and his coach quickly reassessed their targets for 2019.

“Our goals at the start of the season were to beat the South American U20 record and to be a Pan-American U20 champion,” said his coach Felipe de Siqueira. “But after his win at the Brazil Grand Prix, our plans changed.

“We ended up exceeding all expectations,” he added. “It was awesome.”

But he was just getting started.

In early August he improved again, this time to win the Pan American Games title in 48.45. 10 days later, he finished a highly respectable second in Birmingham on his Diamond League debut.

He saved his best performances for when it mattered most, though, recording 48.35 to win his semi-final at the World Championships before his 48.28 clocking in the final, ending 2019 in third place on the world U20 all-time list.

Now he has had a taste of racing against the best in the world, he’d like to make a similar impact on the event in the next few years.

“Of the three big stars in the event, I’d say my style is most similar to Karsten Warholm,” says Dos Santos, who stands at 2.00m (6ft 7in) tall. “I really like him and his personality. I'd like to be a character in the sport like him.”

From Sao Paulo to international success

Dos Santos didn’t get off to the easiest start in life.

One day when his grandmother was heating a pan of oil to fry some fish, Dos Santos, aged just 10 months old at the time, accidentally knocked the handle of the pan, causing the contents to spill all down him.

He suffered third-degree burns and spent four months in hospital. The scars are still visible on his forehead, scalp, face, chest and left arm. He often wears caps or hats to protect the sensitive skin on his head from the sun.

Scarring aside, he eventually made a full recovery and discovered sports, initially focusing on judo. Dos Santos started athletics in 2013 at Pedro Badran State Technical School (ETEC) in his home town of São Joaquim da Barra.

“When I saw him clear a barrier, I thought, ‘this boy is good’,” says Ana Cláudia Fidélis, his first coach. “He started training and in 2015 he earned his first medal at a national age-group championships. Even though he was training on gravel tracks, I knew that he could become one of the best in Brazil and in the world.”

Tall, well-coordinated and showing lots of early promise, Dos Santos landed a place at the Edson Luciano Ribeiro Institute. After just a few years, he represented Brazil at the World U18 Championships Nairobi 2017, placing fifth in the 400m hurdles before anchoring Brazil to victory in the mixed 4x400m relay.

At the World U20 Championships in Tampere one year later, Dos Santos chopped 0.70 off his PB to take bronze in 49.78. He had another year left as an U20 athlete, but few could have predicted the progression he would make over the next 12 months.

Alison dos Santos at the IAAF World U20 Championships Tampere 2018

Dos Santos’s achievements in 2019 landed him with a nomination for the Male Rising Star honour at the World Athletics Awards. Although the award ultimately went to Ethiopian distance runner Selemon Barega, Dos Santos was thrilled to simply be nominated.

“When I found out about the nomination, I was so excited,” he said. “Everyone back in Brazil has been so supportive. I am glad to be a motivation to children who are starting to take up athletics in my city and Brazil. If I can be an inspiration to them, it is a great motivation.”

Dos Santos is about to embark on his first season as a senior athlete, but the Olympic qualifying time is one thing he won’t have to worry about.

He bettered the 48.90 standard numerous times throughout 2019 and is currently the youngest athlete with the qualifying mark. Provided he stays healthy through to August, Dos Santos will make his Olympic debut in Tokyo later this year.

“Alison’s 2019 season was a perfect year for a young man who achieved all of his goals,” says his coach, De Siqueira. “Now we're getting ready for the Tokyo 2020 Olympics.”

He is already just 0.24 away from the senior Brazilian record and 0.44 shy of the South American record. Now more aware of his own potential, Dos Santos has set himself some lofty goals for the upcoming season.

“When I look back and analyse what I did in 2019, I can’t even describe it,” he says. “I was evolving fast, every result. I just feel so happy and thankful. I had a good race at the World Championships, but I’ve had a taste and now I want more.

BACK
Pages related to this articleAthletes
Alison DOS SANTOS 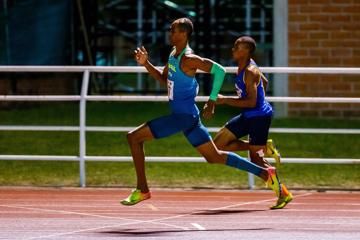 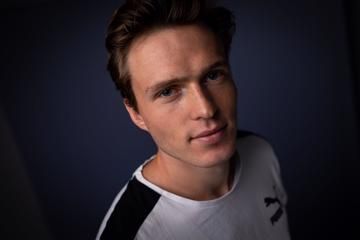