A new generation of champions set to emerge in Tokyo

While some reigning Olympic and world champions might be missing from the Games in Tokyo, the extra year as a result of the postponement in 2020 has allowed a number of new talents to emerge.

For some it means a debut Olympic experience which may not originally have been expected until at least 2024, while for others it is a realistic opportunity to win medals and titles.

Of the 43 individual events contested at the Rio 2016 Olympics, the winners from just 18 of those will defend their titles in Tokyo.

The likes of world 800m champion Donavan Brazier and Olympic 110m hurdles champion Omar McLeod missed out on being selected for their national team, while other stars, such as world and Olympic triple jump champion Christian Taylor, are currently sidelined with injury.

But while those global champions won't be able to contend for top honours in Tokyo, here are some of the new generation of stars who are set to emerge. 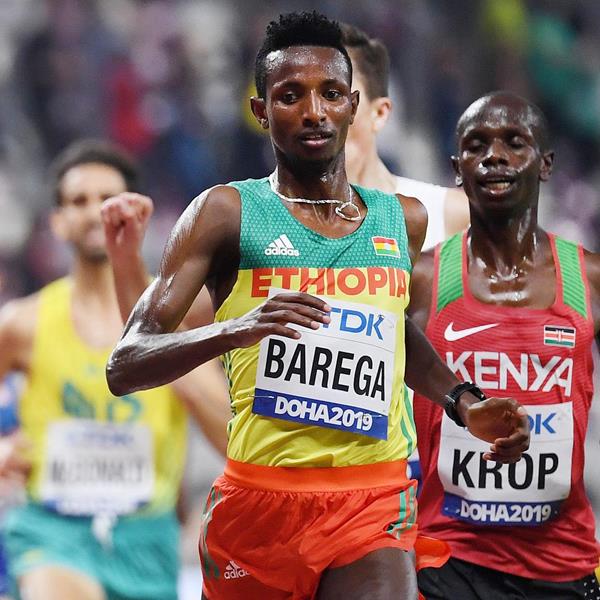 After winning world U18 and U20 titles in 2017 and 2016 respectively, Ethiopia’s Barega stepped up to secure senior 5000m silver at the World Athletics Championships in 2019. Still aged just 21, he is now preparing for his debut Olympics, where he will race the 10,000m. 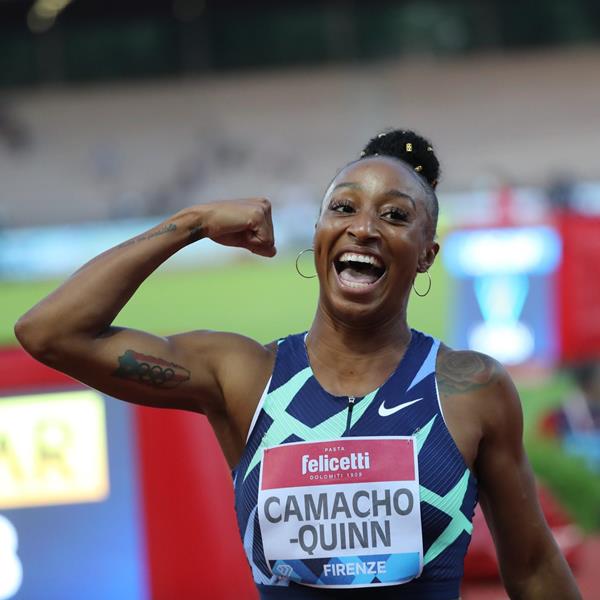 Medal success in Tokyo would see Camacho-Quinn become the first Puerto Rican woman to secure an Olympic podium place in athletics and this season she has certainly demonstrated her ability to achieve that feat.

The 24-year-old improved her own national 100m hurdles record to 12.32 to move to equal seventh on the world 100m hurdles all-time list in Eugene in April and hasn’t been beaten since. She clocked 12.38 to win at the Wanda Diamond League meeting in Florence and 12.34 for success in Szekesfehervar, meaning she has the three fastest times in the world so far this year. “I'm looking forward to the Olympics this year - it will be like redemption from my fall in 2016,” she said after her Florence run as she reflected on missing out on the final in Rio. “I'm really excited. Training really hard, working really hard, but really looking forward to it.” 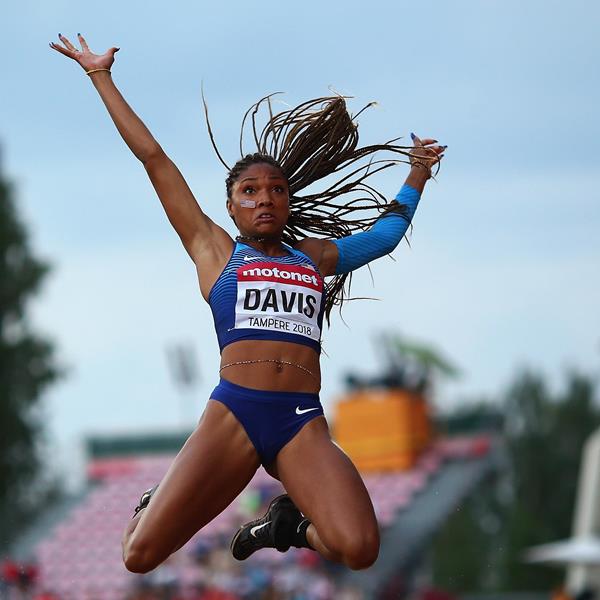 Davis leapt into the seven-metre club in March, breaking the US collegiate long jump record with 7.14m at the Texas Relays. The longest jump in the world since the 2019 World Athletics Championships final, that mark moved the 22-year-old to fifth on the US all-time list.

The world U20 bronze medallist had also broken the collegiate indoor record with 6.93m at the NCAA Indoor Championships earlier in the year and finished second at the US Olympic Trials, going beyond seven metres again with a best of 7.04m. “I’m shocked still because seven metres as a jumper is the biggest thing ever. Hitting it in the Olympic Trials is unreal,” she said after her performance in Eugene, where she finished second to four-time world gold medallist and 2012 Olympic champion Brittney Reese. “I’m freaking jumping with my idol, Brittney Reese. Being with her and competing with her in 2016 I was so starstruck. I was like, ‘I see her on TV and now I’m jumping with her’.” 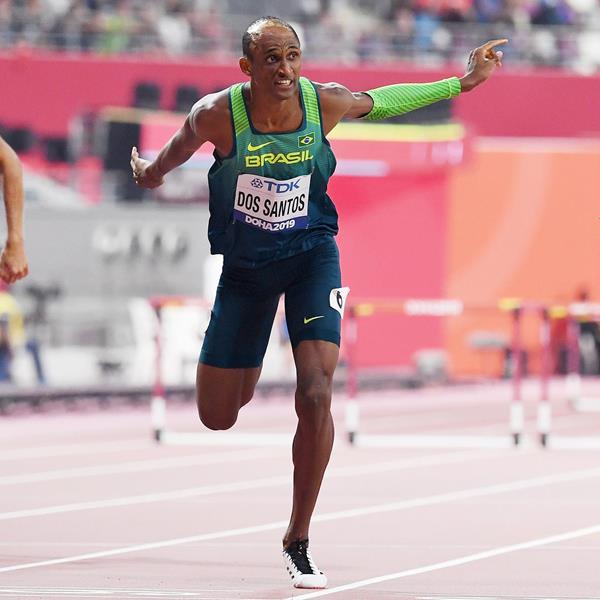 After running in the lane next to Karsten Warholm during his world record in Oslo, improving his South American record to 47.38 to finish second, Brazil’s Dos Santos went even quicker to win three days later in Stockholm, taking another 0.04 off that mark.

This season has seen the 21-year-old build on his 2019 breakthrough, having that year improved his PB and the South American U20 record seven times, eventually clocking 48.28 to finish seventh at the World Athletics Championships in Doha. Also a key member of Brazil’s relay team, he ran the fastest split of the mixed 4x400m final at the World Athletics Relays in Silesia, recording a 44.62 anchor leg. “I'm looking forward to the Olympics, and yes, I think I can get a medal,” he said with a smile after his run in Stockholm. 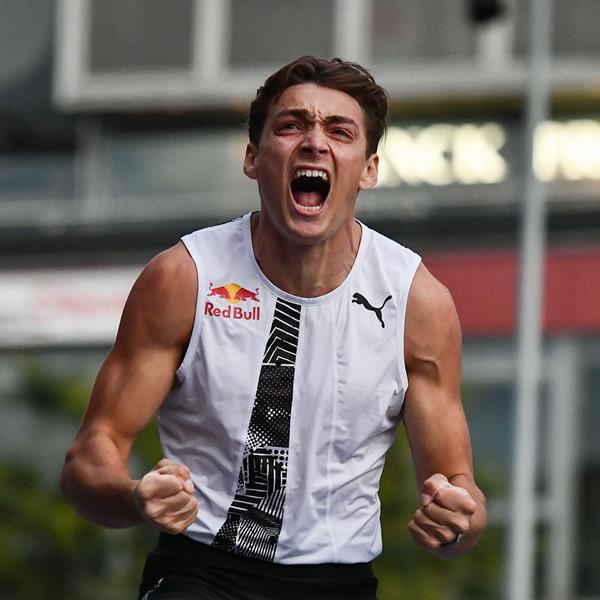 While some may argue that a world record (or two) rules an athlete out from being considered part of a ‘new generation’, pole vault star Duplantis is still aged only 21 and has much more he hopes to accomplish during his career, including winning Olympic gold.

This season he has cleared six metres or higher in four competitions, capped by his 6.10m in Hengelo - a height only he, Renaud Lavillenie and Sergey Bubka have ever achieved. After winning 2019 world silver behind Sam Kendricks - who ended Duplantis’ 23-competition win streak in challenging conditions in Gateshead in May - Duplantis will be looking to go one better in Tokyo. He also believes he can go higher than his 6.18m world record this season and after attempting 6.19m in Oslo, he said: “I really think I can get that record soon. But for now I feel good, a month away from the most important meet of my life. I am in good shape, I am running well on the runway and keeping up the rhythm well.” 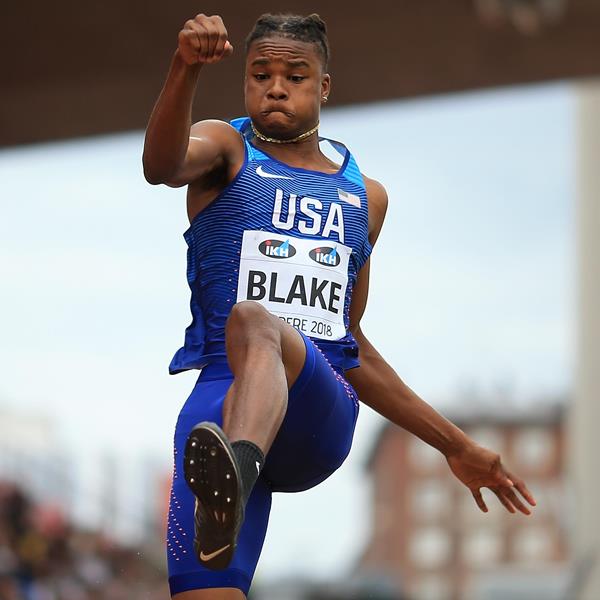 Harrison secured his two Olympic spots in style at the US Trials, soaring over 2.33m and then leaping a PB of 8.47m to improve his own best-ever single-day high jump and long jump double. As a result, he will become the first male athlete to represent the USA in both events at the Olympics since Jim Thorpe in 1912. No other athlete has ever achieved both a 2.30m high jump and 8.40m-plus long jump.

The 22-year-old is no stranger to juggling both events on the same day and in March he cleared 2.30m and jumped 8.45m at the NCAA Indoor Championships. In Tokyo, the high jump final is on the evening of day three and the long jump final is on the morning of day four. He is expecting to rise to the challenge. “It will be harder competition which will make me push harder and jump farther,” he said. 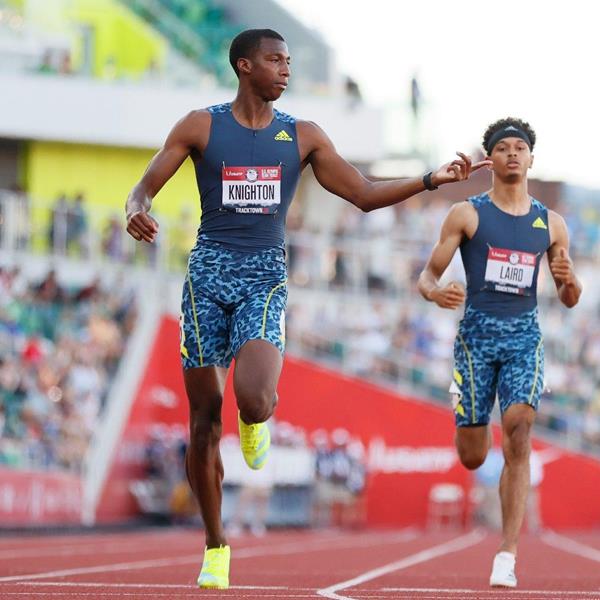 Running 19.88 at the age of just 17, Knighton broke not one but two world 200m age-group bests which had previously been held by a certain Usain Bolt. At the US Olympic Trials, the former American football player ran 20.04 in the heats to improve Bolt’s world U18 best before taking 0.16 off that mark in the semifinals to break the world U20 record of 19.93 set by Bolt in 2004. In the final he went quicker still, clocking 19.84 to finish third and become the youngest man to represent the USA in athletics at the Olympics since Jim Ryun in 1964, also in Tokyo.

Racing outside of the USA for the first time, Knighton then placed third at the World Athletics Continental Tour Gold meeting in Szekesfehervar, running 20.03. “It hasn't sunk in, it’ll probably sink in when I get home,” he said after claiming his Olympic place. “I'm happy. I feel it's a really big achievement.” 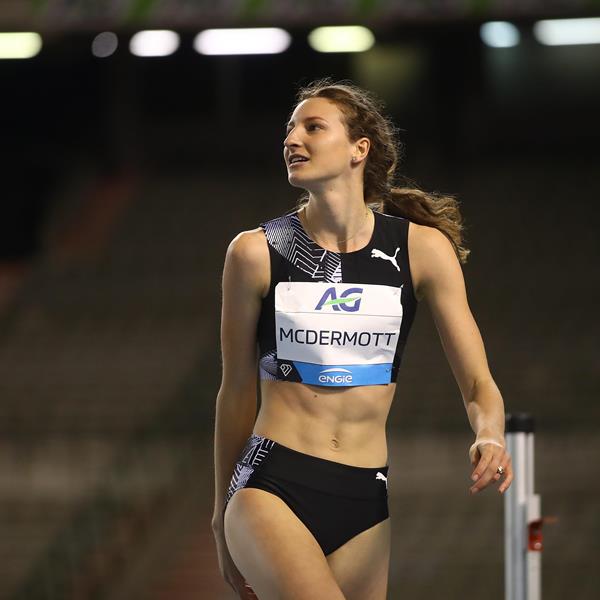 As an eight-year-old, McDermott dreamt of becoming a consistent two-metre-plus international high jumper and having already achieved the latter, this year her two-metre aim was accomplished, too. Clearing 2.00m at the Australian Championships in April, the 24-year-old broke Eleanor Patterson’s Oceanian record and then added another centimetre to the mark in Stockholm earlier this month, despite not feeling 100 percent.

McDermott didn’t manage to register a height when she made her World Athletics Championships debut in London and two years later the Commonwealth bronze medallist finished 15th in qualifying. This time, as she makes her Olympic debut, her mind is on medals. “I’m not going to say it’s impossible to get a medal,” she said. “I’ll be aiming and I think 2.01m will maybe get me in the medals so I am aiming and training for that and believing that I can do it.” 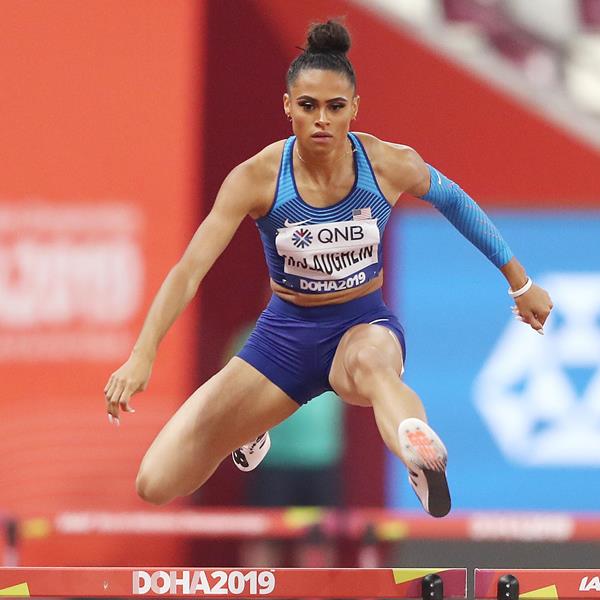 Like Duplantis, McLaughlin is already a world record-breaker having taken the 400m hurdles to another level with her time of 51.90 at the US Olympic Trials. She also was no stranger to making history before that, with world U18 best and world U20 record times among her age-group accomplishments.

Now aged 21, she made her first Olympic team at just 16, finishing fifth in her semifinal nine days after her 17th birthday, and then secured silver at the 2019 World Athletics Championships in Doha, a race won by her compatriot Dalilah Muhammad in a world record of 52.16. It was that mark McLaughlin improved in Eugene. “So many amazing women have come before me and will come after me,” she said after her world record. “I'm excited for what the future holds. I just want to leave my mark and be part of such an amazing sport, because the glory isn't forever.” 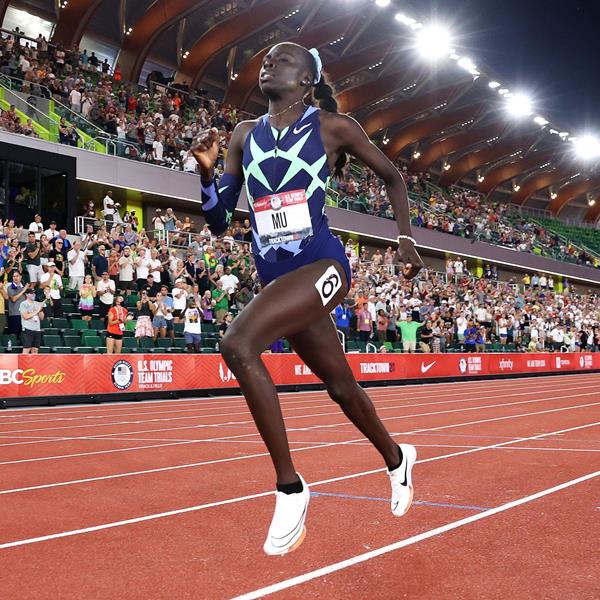 Mu is another athlete to have risen impressively through the ranks, having stormed into the spotlight in 2019 when as a 16-year-old she ran the second-fastest ever indoor 600m time of 1:23.57. This year she has broken the world U20 indoor 800m record with 1:58.40 and then dominated the two-lap final at the US Olympic Trials, running a world-leading 1:56.07 to improve her own North American U20 record.

The 19-year-old also ran an area U20 record in the 400m with 49.57 to win the NCAA title earlier in the month. “This is my first year coming out here running to my potential,” she said after her trials win. “I wouldn't want to say I'm dominant at it yet. My confidence takes a lot from it. In 2019, I wasn't confident, but I was good enough. Gaining confidence has contributed to my dominance thus far in the 800m. Being good at it, knowing it's my event.”

While some reigning global champions may be missing out on Tokyo, there are a number of vastly experienced stars who will be adding another Olympics to their impressive tally of major events. The USA’s Allyson Felix has already won six Olympic gold medals and 13 world titles, while shot put star Valerie Adams has claimed two Olympic and four world titles for New Zealand, with Tokyo being a fifth Olympic Games for both athletes.

Spain’s 51-year-old Jesus Angel Garcia, meanwhile, will compete at his eighth Olympics – the most ever for a track and field athlete. Who knows whether some of this new generation of stars will still be in action come the Olympic Games in 2048!

With so many athletes having impressed over the past year it was a challenge to keep this list to 10, but more on some of the many stars of the upcoming Olympics can be found in our '100 ones to watch in Tokyo' series. Some are gold medal favourites, others are outsiders, but they all have fascinating stories that are worth following - sprints, middle-distance, long distance, hurdles and steeplechase, vertical jumps, horizontal jumps, short throws, long throws, combined events and race walks. 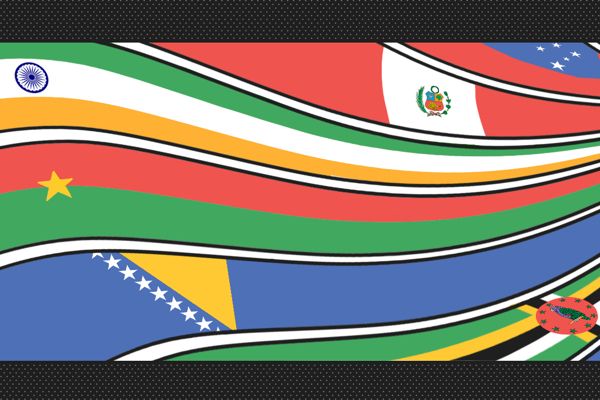 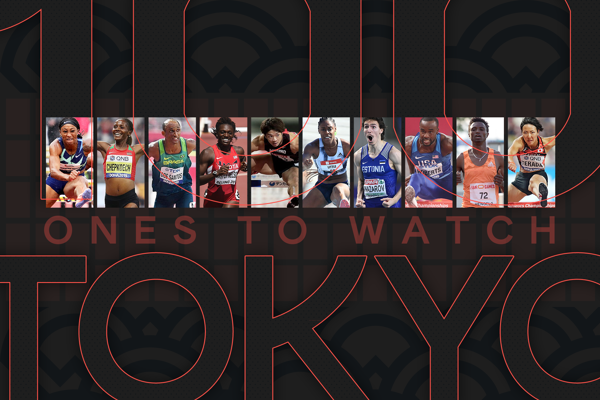