"Everyone in Finland was amazed," said a colleague from the spiritual home of the javelin. You can say that again. Everyone in the world was amazed; including the man who had won the Javelin Throw title. Recently crowned World junior champion, with 78.64 metres in Barcelona exactly a month ago, Keshorn Walcott opened with a Trinidad & Tobago national record of 83.51m, threw another record (84.58m) on his second attempt, and watched with mounting fear and wonder as a string of European luminaries in his event came close but failed to dislodge him from pride of place – first, and Olympic champion.

His first reaction when he left the field after the competition was, "I’m surprised I even made the final." At the press conference an hour later, it still hadn’t sunk in. "I’m not really catching up yet with what I’ve done. I can’t believe it. I’m just enjoying every moment."

Just to put this in some perspective, not only has no male Caribbean thrower outside Cuba ever got close to an Olympic final, but apart from the occasional north American thrower, and a handful of Japanese and a New Zealander years ago, the top eight has been exclusively European. The 19-year-old Walcott tore all that asunder on the final evening in the Olympic Stadium at London 2012.

Walcott was born in Toco, on the north-west coast of Trinidad, and was introduced to athletics by his elder brother, who is a triple jumper. "I was no good at sprinting (the staple of Trinidad & Tobago athletes), so I took up the javelin about four years ago, and I was good at it, so decided to stick with it.

"The Caribbean and Trinidad in particular is not well known for throwing or even field events, but hopefully in future there’ll be more people interested in field events, and not just track.

"I don’t know what the others were expecting from me. I know they came into the competition as favourites, especially Andreas Thorkildsen, hoping to get his third gold medal, and I have to say I was expecting a bigger throw from him."

Like many young West Indians, Walcott was attracted to cricket, but admits, "I wasn’t that good. I used to bowl, and the action is a bit similar to javelin throwing, so I got into javelin after that.

"In my first year of competing I just went out and had fun. With my brother doing track and field before me, I just wanted to follow in his footsteps. I went to the World junior championships before, when I was 16, and didn’t do very well (9th in qualifying, Moncton 2010), so I decided to really push myself hard after that."

Walcott said that he had received several offers from US universities, to take up a scholarship, but said, "I intend to stay with my coach for now, things have been working out really great, so for the time being, I’m going to be based in Trinidad."

Asked if, like other famous Trinidadian sports successes, he might get a stadium named after him, he looked shocked at the suggestion. "I don’t look on myself as famous yet. But I am proud of myself; and I hope everyone back home is too."

He can be sure of that. 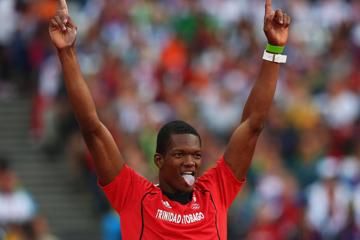 After springing biggest surprise of the Games...