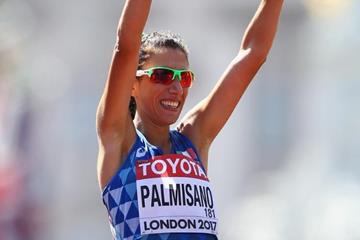 Finally injury free, the only way is up for Palmisano

Getting through a whole winter season with no interruptions was an unfamiliar experience for Antonella Palmisano.

The Italian race walker had finished in the top five at the IAAF World Championships Beijing 2015 and the 2016 Olympic Games in Rio, but she had battled injuries in the build-up to both of those championships.

“I didn’t walk for 20 days before the 2015 World Championships but I managed to finish fifth. I had no winter training leading in to last year but I crossed the finish-line in fourth place in Rio,” said the 26-year-old from Mottola, near Taranto. “This year I could train normally. And it was quite strange.”

The early signs were promising. After clocking an indoor world lead of 12:08.83 for 3000m in February, she broke Ileana Salvador’s Italian 10,000m race walk record in Orvieto with 41:57.23, becoming just the fifth woman in history to cover the distance on the track within 42 minutes.

“I was very calm and relaxed in Orvieto, which was an unusual feeling after getting through some very difficult seasons,” said Palmisano. “I really enjoyed competing there, and dipping under 42 minutes was a confidence booster.”

Her first big test of the year came at the European Race Walking Cup in Podebrady. She dominated the 20km event and crossed the line nearly two minutes ahead of her rivals, winning in 1:27:57, just six seconds shy of her PB.

“It was my first victory in a major senior race,” said Palmisano, who won the junior women’s title at the 2010 World Race Walking Cup. “It’s a dream come true to achieve this result in a race where I always felt in control.”

With her win in Podebrady, Palmisano followed in the footsteps of two notable compatriots. 1964 Olympic 50km race walk champion Abdon Pamich won one of his greatest races in Podebrady in 1956, while Anna Rita Sidoti won the European Cup in La Coruna in 1996, making her the only Italian athlete before Palmisano to win the title.

Palmisano’s Podebrady win came two years and one day after Sidoti’s death. After suffering from cancer, the 1997 world champion’s death in 2015 had a significant impact on many Italian athletics fans who admired the diminutive race walker, not only for her great performances but also for her career-long work ethic and the courage she showed during her long illness.

“It’s a big honour to know that I am the only Italian race walker to win at the European Cup after her,” said Palmisano. “I hope that I will be able to follow her example in sport and in life.”

Three months after the European Cup, Palmisano arrived at the World Championships in the form of her life.

“I didn’t feel any pressure in London because I was well prepared,” she said. “I was focused only on myself and my technique.”

Palmisano’s pressure-free and patient approach paid off, and in the final few moments of the race, she found herself in a medal position.

“I started the race with the aim of being at the front of the leading pack and staying with the best race walkers in the world,” she said. “I felt good when they pushed the pace at 15 kilometres, but I wasn’t able to respond at 18 kilometres and I was left behind. It was only with 20 metres to go, when I saw that Chinese race walker Lyu Xiuxhi had been disqualified, that I realised I had won the bronze medal.”

Palmisano took more than a minute off her PB to finish third in 1:26:36, just 18 seconds behind winner Yang Jiayu of China and Mexico’s Maria Guadalupe Gonzalez.

“After dreaming of this medal for a long time, I have finally fulfilled my goal,” she said. “My only regret is that I couldn’t keep up with the top two race walkers until the finish. I only realised after the race that I’d improved my personal best because I hadn’t been focusing on the time. I was surprised because I didn’t think I had walked so fast.”

Boyfriend Lorenzo Dessi, also an international race walker, proposed to Palmisano after last year’s Olympics and they plan to get married in September next year. Her father, Carmine, doesn’t travel often but watched her compete in Podebrady and London this year, as well as at the 2014 European Championships in Zurich. Her mother, meanwhile, makes flowers for Palmisano to wear in her hair at each of her major competitions.

“The flowers are my special lucky charm,” said Palmisano. “In Podebrady I wore the same blue flower I always wear for European and World Cup events; it is the same one I wore in Chihuahua seven years ago.

“I chose a different colour for the Olympic Games and the World Championships. It depends on the colours of the flag of the host country where the event takes place. In Rio I wore a green and yellow flower. In London I chose red, white and blue, the colours of the British flag.”

One of Palmisano’s closest friends in athletics is 2008 Olympic and 2011 world bronze medallist Elisa Rigaudo, who retired last year at the age of 36 after finishing 11th at the Olympic Games in Rio.

“It was a privilege to train with her and I learnt from her the secret to be always relaxed before competitions,” said Palmisano. “In Rio she was so calm before the race and I wondered how she managed to keep this relaxed approach to athletics and life. She also showed that it is possible to combine a sports career with motherhood.”

Palmisano rounded out her 2017 campaign with an individual win at the ‘Around Taihu International Race Walking Multi-Day Competition’, a multiple-stage contest held over four days at the end of September around Lake Taihu in China.

“It was a good experience,” said Palmisano, who enjoyed a two-week break after her efforts in Taihu. “It’s different from the traditional 20km race walking events. The races were held on demanding and hilly courses on four consecutive days and were very hard. You can compete with teammates from different countries and I really enjoyed the experience of racing without pressure. China is a lucky country for me.

“It was interesting to see how my body responded to the jet-leg during my recent trip to China, as it could be an important factor considering that the next big events like the IAAF World Race Walking Team Championships and the Olympic Games will be held on Asian soil.”

She hopes China will once again bring good fortune when she competes at the IAAF World Race Walking Team Championships Taicang 2018.

“My coach, Patrick Parcesepe, told me that I have to forget what I achieved this year and continue working hard,” said Palmisano. “I’m training hard to reach my best form in two years at the Olympic Games in Tokyo, but next season will feature very important events and my main goals will be Taicang and the European Championships in Berlin.”

And, for a bit of extra luck, perhaps Palmisano will wear a red and yellow flower in her hair when she lines up in Taicang.