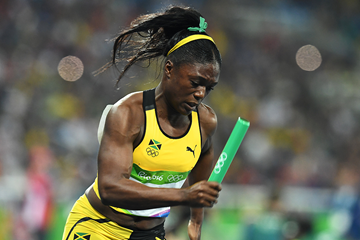 On a team that included three women with multiple Olympic gold medals, it is perhaps no surprise that the fourth member of Jamaica’s 4x100m quartet in Rio last year was somewhat overshadowed in 2016.

But 22-year-old Christania Williams hopes to one day follow in the footsteps of her teammates from Rio – Veronica Campbell-Brown, Shelly-Ann Fraser-Pryce and Elaine Thompson – by making it on to the top step of the podium at a major global championships.

Born in the parish of St Mary some 45 miles outside of Kingston, Williams showed early promise while at Oracabessa High School where Coach Eric Nembhard observed her talent when she competed at the school’s annual sports day. The school didn’t have a structured athletics programme, so Williams became the pilot project.

She argues it was one of her biggest challenges and the experience, though burdensome at the time, helped developed her resilience and mental strength.

“I remember my first time competing for Oracabessa High School at Champs (the ISSA Boys’ and Girls’ Championships) inside the national stadium,” said Williams. “It was very tough because I had no experience, plus I was the only one competing for my school in the first year.”

She didn’t have the luxury of some of the other teams who housed their athletes at hotels and villas in the capital. “I also had to travel back and forth between Kingston and St Mary every day of the championships,” she added. “It was rough, but I managed.”

Williams’ desire to succeed prompted her to make a life-changing decision. She transferred to Edwin Allen High School, an athletics powerhouse institution, located in the parish of Clarendon where she met coach Michael Dyke. She clocked 11.39 to top the world U18 list for 2011, but due to transfer eligibility rules, she had to sit out a year before participating at Champs.

Notwithstanding, all was not lost that season for Williams who went to the IAAF World Youth Championships in Lille with high expectations. “I went there as the favourite, I had the fastest time going in,” said Williams. “I don’t know if it was my inexperience or the weather; I really don’t know what happened, but I got a bronze even though everyone was expecting me to come back with the gold. But I was still happy.”

“I didn’t expect to run that fast,” said Williams, whose preparation leading up to the event was far from ideal. “It was just two weeks before Champs that I started my sprint work, because I didn’t get much background training after injuring my toe. Then I had groin and hamstring problems. It was really rough for me and so I didn’t expect to go out there and run 11.19. That was just amazing and it made me happy.”

After leaving high school, Williams relocated to Kingston to join the world-renowned MVP Track Club where she began training with her role model.

“I always wanted to join MVP because it’s a great camp for women,” said Williams. “My coach Michael Dyke also encouraged me to go there. I also chose MVP because I wanted to train with Shelly-Ann Fraser-Pryce who I admire for her start and execution. She’s amazing.”

Things were going according to script for Williams and she seemed destined to make the Jamaican team for the IAAF World Championships Beijing 2015 when her plans were aborted. “I missed the 2015 senior trials due to a hamstring injury,” she said. “That was a very difficult time for me.

“There were times when my injuries didn’t seem like they would go away and I felt like quitting. But my mom, who is also my mentor, was always there encouraging me to carry on. So whenever I think about giving up, I always think about my mom and family and that gives me that extra push.”

After missing the previous season, Williams was intent on making 2016 count. The fact that it was an Olympic year took on added significance.

At the Jamaican Championships, Williams muscled her way into the 100m final after an impressive semi-final win in 11.10, just 0.03 shy of the PB she set five weeks prior. In the final she ran a lifetime best of 10.97 to finish third behind MVP teammates Thompson (10.70) and Fraser-Pryce (10.93) to secure her place on the team for Rio.

“It felt really great,” Williams recalls. “Everyone, including my coach, expected me to run a sub-11 time a long time ago.”

Williams performed creditably at her first Olympic Games and reduced her PB to 10.96 in the semi-final to qualify for the final. She knew she wasn’t among the favourites, but that did not dampen her ambitions.

“I felt comfortable during the rounds,” she said. “I wasn’t nervous because that’s where I wanted to be competing against the best and making it to the final was a wonderful feeling. Going into the final, I was very confident of course; I had a plan to go out there and run another personal best and get a medal.

“However, while walking on the track I felt my calf muscles begin to contract. If you watch over the tape before the final, you’ll see me stretching and stretching as I was trying to make the pain stop or go away but it didn’t. After the pistol went and I ran out of the blocks, I felt it immediately. I stumbled and everything went downhill afterwards and I finished eighth.”

With a few days off to recover between the 100m and 4x100m finals, Williams was back on track later in the Games to run the lead-off leg for Jamaica. They produced the fifth-fastest time in history, 41.36, but had to settle for second place behind the USA, who clocked 41.01. Jamaica’s performance was the fastest ever time recorded for a second-placed team.

“We wanted to win gold, but it didn’t happen,” said Williams. “I was happy with my silver; it was a great achievement and made up for my disappointment in the 100m. I’m glad I didn’t go home empty handed.”

Williams is a member of Jamaica’s squad for the IAAF/BTC World Relays Bahamas 2017 and is eagerly anticipating the rematch against the USA in Nassau.

“I like the rivalry,” said Williams, who was a member of Jamaica’s triumphant medley relay team at the 2011 World Youth Championships, finishing ahead of the USA. “We’re not afraid of them. I know we can beat them, and as long as my teammates and I are healthy, we are going out there to avenge that loss in Rio.”