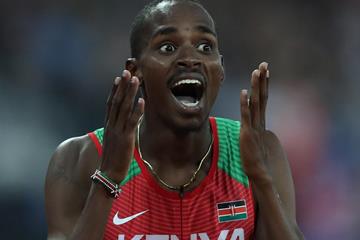 History has witnessed a number of 400m sprinters successfully stepping up in distance to the 800m. But surely very few former one-lap specialists have ever made such a stunning impact shifting directly to the 1500m as reigning world champion Elijah Manangoi.

Back in 2013 the slender Kenyan was among his country’s finest 400m exponents. In June of that year he ran 46.5 to place fourth at the national championships but frustrated to finish only sixth in 47.33 at the World Championship Trials he sought a radical new challenge.

“When I was training for the 400 metres I would always do well in the endurance sessions and I could easily run 3x800 (in training),” explains Manangoi. “I also remember my old coach Colm O’Connell telling me I could one day become world 1500 metres champion.

Shortly before the 2014 Kenyan Championships Manangoi fully committed to the move and in only his third race over the distance he finished second behind Ronald Kwemoi in 3:35.00 to book his spot on the Kenyan team for the Commonwealth Games in Glasgow.

His instincts had proved overwhelmingly correct.

One of 35 siblings --Manangoi’s father has five wives-- Manangoi acknowledged his running talent from a young age.

“When I was a little child playing around home with the other boys I realised I was much faster than them over 100m and 200m,” explains Manangoi, who supplemented his speed with daily 3km runs to school and back each day.

He started competitive running aged 12 at primary school and later competed at both a provincial and national level at high school. “I was in form two in high school when people started to say I had a talent for running,” he explains.

A ‘straightforward’ shift in direction

The 400m became his discipline of choice before that moment of inspiration when he acknowledged his gifts might be better served as a 1500m athlete.

Unfortunately, a tendon injury badly compromised Manangoi’s efforts at the 2014 Commonwealth Games as he wound up 12th in the 1500m final behind his countryman James Magut. However, he returned to his training base at the Rongai Athletics Club just outside of Nairobi convinced his decision to step up to the metric mile was the right one.

Enjoying a first full year training as a middle-distance runner he coped admirably with the fresh training demands.

“I found it quite straightforward,’” explains Manangoi whose younger brother George (a full brother) struck world U18 1500m gold in Nairobi last July to further bolster the family running heritage. “I was doing a lot more endurance and I did not find myself in a difficult place. It was not too hard.”

In 2015 he emerged as a world-class performer securing the Kenyan title and banking a spot on the Kenyan world championship team courtesy of a third-place spot at the trials.

He also ran a confidence boosting PB of 3:29.67 for sixth at the Monaco Diamond League before excelling on his World Championship debut in Beijing winning silver behind his idol and good friend Asbel Kiprop courtesy of a blistering late sprint.

“I knew I was in the medal bracket, but to win a silver was amazing,” he recalls. “I learned so much from Asbel (Kiprop). He is like a brother to me. He has told me so much about training and preparing for a competition. He is not jealous. Even when I beat him he is here for me.”

Manangoi enjoyed another good campaign in 2016 earning five top three IAAF Diamond League placings --including victory in Rome-- in the countdown to the Rio Olympics. However, he was left devastated in Brazil when a hamstring tear he picked up during the heat ruled him out of the semi-final.

Yet rather than wallow in self-pity the 24-year-old Kenyan refused to let the disappointment linger. Instead he refocused and under the wise counsel of his coach Bernard Ouma he introduced aqua-jogging into to his training regime three times per week.

Manangoi emerged in 2017 stronger and fitter than ever. He claimed victory in the opening Diamond League of the season in Doha and set a scintillating PB and world lead time of 3:28.80 to win in Monaco and claim victory in his final pre-World Championship outing.

“Running 3:28 gave me a huge amount of confidence,” he explains. “After that run, which was a world lead, I thought maybe I can run well in London. Maybe I can win a medal.”

After advancing impressively to the final following victories in both his heat and semi-final many fancied Manangoi to deliver and with his fellow Kenyan and training partner Timothy Cheruiyot also in the field he used this to his advantage.

“I knew he (Cheruiyot) was a very strong lapper but maybe he doesn’t have that kick finish,” he says. “Then when he told me to follow him before the race that’s what I did.”

The race played out perfectly for Manangoi. Tracking Cheruiyot for the bulk of the race he relied on his trademark acceleration down the home straight to strike gold.

“It was an unexplainable moment,” he says. “I could not believe I was world champion.”

Since winning gold Manangoi says he holds a new-found respect from the public but he has already set his gaze to 2018 where he has a couple of ambitions.

“I would like to win the Commonwealth 1500m title in Gold Coast and I would also like to lower my PB to possibly 3:26,” he says. “That is what I am praying for.”

The 400m remains a distant memory, but what does the world 1500m champion reckon he could run for the one-lap distance today? “Honestly,” he says. “I can run 46 seconds."

With that much speed coupled with his still developing endurance Manangoi is likely to be a formidable 1500m force for many years to come.