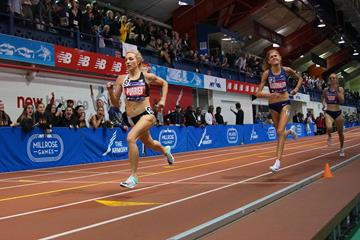 It’s an accepted truism in middle-distance running: the kick is determined not so much by speed, but strength – the ability to harness the highest percentage of your top pace when it matters most.

And so, last Saturday night in New York, when Elinor Purrier switched into lane two towards the end of the Wanamaker Mile, what others saw was a dazzling display of speed. But what she knew was telling most was her strength.

Purrier blasted past race favourite Konstanze Kosterhalfen to claim victory at the Millrose Games and set a North American indoor mile record of 4:16.85.

In distance-running, strength is a term that typically refers to aerobic ability, which Purrier has built over the past year through a steady, consistent workload of 70 miles a week. The word’s classic definition is different, but when it comes to muscular strength, few distance runners can rival Purrier.

The roots of that lie in her childhood.

She grew up on a dairy farm in Montgomery, Vermont, and as a kid the alarm clock would sound at 5am to pull her from her bed and out to lend a hand. She’d feed or milk some of the family’s 60 cows before school, scrape out the barns and do whatever else was needed.

From what age was that the norm?

“Always,” she says. “I never remember not helping.”

She was the smallest in her family growing up so throughout those years, Purrier felt like she was “always trying to keep up” when it came to tasks like throwing hay with her siblings and workers hired by her father. It helped her in ways she would only later understand.

“Ever since I was little, people told me that I was strong and tough and I think that definitely comes from growing up on the farm,” she says. “It definitely has a big impact not just on my career, but as an overall person. I'm very thankful for the way my family raised me. We were always getting stuff done and had expectations from an early age to work hard.”

These days, she is exempt from such duties when she returns home.

“I kind of like to (do farm work) because I miss it so much, but my Dad totally understands that my work now really requires a lot of my body so when I'm home I'm usually trying to recover.”

Her first try at running came through the Girls on the Run programme in eighth grade, but Purrier didn’t truly take up the sport until high school. She was more of a basketball player in those years and only while at the University of New Hampshire did her Olympic dreams take shape.

After a few near-misses she won the NCAA Indoor mile title in her final try, and 2018 was also the year she switched her focus outdoors from the steeplechase to flat events. She signed a professional contract with New Balance that summer and moved to Boston to train under renowned coach Mark Coogan.

“He's had a lot of success with coaching women in the past so that definitely gives me confidence in his coaching,” says Purrier. “He's really chill. I like that attitude and atmosphere he brings to the team because he makes it like a family around here.”

By ‘here’, Purrier means Flagstaff, Arizona, where she has trained for much of the past two months – her third trip to the hotspot for distance runners which sits at almost 7,000 feet (2,130m).

“I think that my body's just been adapting really well,” she says. “I slowly increased my mileage every year from high school all the way up through college, 10 miles a week (each year) and I've been running 70 miles a week pretty consistently for the past year. Building that has helped me not burn out too quick and to really absorb the training.”

The dawn of an Olympic year saw her hit the ground running. Purrier opened her season at the New Balance Indoor Grand Prix in Boston and in the first leg of the World Athletics Indoor Tour, she powered to victory over two miles in 9:29.17.

Heading to New York for the Millrose Games, her plan was simple. Everyone knew Klosterhalfen would try to run the legs off her rivals in the middle of the race and Purrier’s instruction was simple: “Mark just told me to stay on her and try to kick as hard as I could.”

Purrier said it was “only in the last 15 metres” that she believed she would win. “I wasn't super confident that that was going to happen, but I definitely gave myself a chance.”

And as for the time, which puts Purrier second on the all-time indoor mile list?

“No, honestly, I wasn't really expecting that at all,” she says. “I didn't even know what the (US) indoor record was. I just was just trying to compete the best I could.”

Next up is the US Indoor Championships in Albuquerque, where Purrier will compete in the 3000m this Friday (14) and then make a decision about Saturday’s 1500m. In both events her chief rival is likely to be Shelby Houlihan, another athlete gifted with superb strength and a vicious finishing kick.

Much like Houlihan, the breadth of Purrier’s ability leaves her in a tricky, if enviable, position as she prepares to turn her attention outdoors. Will she focus on the 1500m or 5000m – or both – ahead of the Olympic Games?

“I don't really know,” she says. “I always loved the mile and the 1500. I feel like that's like really where my heart is, but I also had a lot of fun with the 5K and that's what ultimately got me to the World Championships. We're going to see how training goes and make a decision later.”

In recent days she has had to re-align what’s possible in 2020 – not that Purrier is getting ahead of herself.

“It gave me a lot of confidence, but I'm just kind of trying to take it one step at a time and focus on the meet this weekend,” she says.

Her goal for the year is still the same: “Definitely making the Olympic team.”

Do that, she knows, and with her strength, her speed, just about anything is possible.