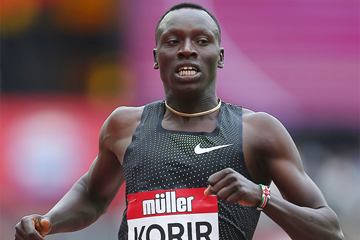 Emmanuel Korir’s stunning 800m win at the IAAF Diamond League meeting in London will go down as one of the stand-out performances of the summer.

The Kenyan’s time of 1:42.05 was the fastest in the world since 2012 and puts him sixth on the world all-time list, a front-running exhibition reminiscent of David Rudisha’s world record, Olympic gold medal-winning run on the same track five years earlier.

For Korir, 23, whose previous race in the British capital had ended with a sigh, hitting the front was a high-stakes gamble that paid off.

“I accosted Nijel [Amos] to see if he could run at the front to maybe like 600 metres, but he was telling me that he wasn’t feeling good,” explains Korir. Amos ran 1:42.14 in Monaco two nights previous.

“So I had to take a risk. I was feeling like maybe I could lose the race, but I thought, ‘No, let’s try it: I’m going to hold it’. And that is how it happened.”

It was also a neat piece of atonement for Korir, who had come up short at last year's World Championships on the same London track, where he was a medal contender.

He had built a reputation on the US collegiate circuit, where he went on an unbeaten run that lasted the year and included a world indoor best of 1:14.47 over 600m, and NCAA titles indoors and out. That streak didn’t stop away from US shores. First he won the Kenyan trials, beating the likes of 2016 IAAF Diamond League champion Ferguson Rotich, to confirm his spot at the World Championships. Then, on his IAAF Diamond League debut, he destroyed a world-class field by more than a second at the Herculis meeting in Monaco, sizzling to 1:43.10, the fastest time of 2017.

But the rounds in London roughed him up. Although he won his heat, in the next day’s semis he traipsed in fourth. His undefeated season and World Championships campaign were wrecked.

Talking from face down on a massage table, 11 months on from that ignominy, his feelings couldn’t be more different.

“Last year, when I was in London, I was so disappointed,” recalls Korir. “But right now? I think I like it.”

His rail-hugging front run, repelling back-straight attacks from Commonwealth champion Wycliffe Kinyamal and Olympic bronze medallist Clayton Murphy, was not the intended tactic, but has left him brimming with confidence.

“Right now I feel courageous, because I’ve never run at the front before,” he says. “My last time, I don’t even remember. Not even indoors. The only race I ran from the front was my first 1:43, and that was because the pace maker was supposed to run 50 and he ran 52, so I split negative.

“For some races, right now, and maybe for some to come, I know that right now I’m capable of running at the front all the way. So that’s what I will be doing. I’m sure if I do that after 400 metres, I will run the best of times.”

Korir is not a long-time 800m runner. Growing up in a village outside of Iten, attending the same high school as Rudisha, he had primarily been a 400m guy. Then, in August 2016, Kenyan-born coach Paul Ereng recruited him to study at the University of Texas at El Paso.

Ereng liked how “explosive” Korir looked but, himself having started life a quarter-miler before moving up to 800m – with great success; he won the 1988 Olympic title – knew his recruit lacked an aerobic base. Long runs and cross country were prescribed to build mileage, but came at a cost. Although he enjoyed dizzying success in that opening year, the ramp in intensity left him flat for the World Championships.

A year on, Korir has made “one-hour long runs in the morning” a staple. The returns are obvious. His winning return to London maintains an unbeaten season that includes IAAF Diamond League victories in Doha and Eugene (despite nearly falling with 200 metres to go).

“What I need now is a little bit of strength,” Korir says. “I feel like I need to be stronger, you know? I have the speed, I have the endurance. I do a lot of workouts, speed work. But what I lack is the strength. I will have to go to the gym.

This week’s African Championships in Asaba, Nigeria, will be a major test. “Heats, semis and finals, it will not be easy,” says Korir, pondering a rematch with Amos.

“1:42 is not satisfying,” says Korir, quite seriously. “If I get some guys who are strong and can push me all the way to the finish line, it will be crazy.”

There are plenty of reasons to believe in his ambition. Although he has forgone his NCAA eligibility to run professionally, he’s still a student, squeezing in sessions between classes.

“I’ve been so busy with schoolwork, so I don’t have a lot of time for relaxing,” he says. His major is kinesiology, the study of human movement. “I’m interested in it, you know, because I’m trying to improve my style to get faster.”

What is more, Korir has been competing thus far in 10,000m spikes, which lack the rigidity and response of a middle distance design. “I like the spikes, and I believe that I can run fast in them,” he insists. “But I think I’m going to change next year to use sprinting spikes.”

And then there is his 400m background, which, in fact, remains very much at the foreground. Korir won the Kenyan title at that distance, lowering his PB to 44.21, a time only five men have bettered in 2018.

After London, he is the only man in history to have gone sub-45/-1:43 for the two events. This year, without collegiate pressures, racing less often has produced astonishing performances. It is the template he hopes will bring a medal at next year’s World Championships in Doha.