Emmanuel Korir ran the fastest 800m since 2012, clocking 1:42.05, to light up the second day of the Anniversary Games in London on Sunday (22), the 11th meeting in the IAAF Diamond League.

The 23-year-old Kenyan takes the accolade from Nijel Amos, who illuminated Friday night’s Monaco meeting by winning in 1:42.14, but was helpless as Korir produced a powerful front-running, head-turning performance.

He took up a spot behind pacer Bram Som, who took them through the first lap in 49.87. Though Wycliffe Kinyamal was probing in his wake, Korir – who won the Kenyan 400m title in 44.21 last month – clung to the rail to repel the challenge. He then pulled away through the final 200 metres to lower the world lead and smash the meeting record. It catapults him to sixth on the world all-time list, a feat not even Korir expected so soon.

“I am happy because that is a huge performance from me,” he said. “My personal best I set last year, and I wanted to break that maybe next year, but I managed it earlier than planned. It’s important to beat those guys because they’re all really strong.”

Kinyamal was overtaken through the final bend by USA's Clayton Murphy, just holding to claim second in 1:43.12. Kinyamal was awarded the same time, a PB, to finish third and stay atop the IAAF Diamond League standings. Amos was fourth in 1:43.29 – impressive given his exploits less than 48 hours earlier.

The middle-distance fun did not end with that race. In the final event of the day, Sifan Hassan won the women’s mile in 4:14.71 – a time that rockets her third on the world all-time list.

Just nine days ago, the Dutchwoman set a European 5000m record in Rabat. Here, she and Hellen Obiri – who won that race in Morocco – held back over the first two laps as Gudaf Tsegay was the only athlete to follow the pacer. Overall IAAF Diamond League leader Laura Muir was heading that chase but couldn’t cover Obiri and Hassan as they began to move through the third lap.

Hassan took up the lead at the bell and never looked like being caught.

“It’s unbelievable how fast I ran today,” said the 2016 world indoor 1500m champion. “I have the endurance and speed but don’t normally have the last kick and today I did.

"It will be incredible to see how fast I can actually run in the future.”

Tsegay rallied to finish second in 4:16.14, while Obiri’s efforts saw her record 4:16.15 to improve on her own Kenyan record. USA’s world silver medallist Jenny Simpson once again showed her racing smarts to claim fourth in a PB of 4:17.30.

A smartly-run final lap saw Olympic champion Matthew Centrowitz prevail in the non-ranking men’s 1500m in 3:35.22. Keeping near the front of a chasing pack that was unbothered by the break of Izaic Yorks and Youssouf Hiss Bachir, who were the only racers to go with the pacers, Centrowitz moved to the lead with 150 metres remaining. Australian Ryan Gregson made a late push but could not make a decisive move. He finished second in 3:35.35.

The women’s non-scoring 800m produced a fast finish. USA's Ce-Aira Brown and Jamaica's Natoya Goule led into the home straight and went stride-for-stride through to the line. Brown just edged it, recording 1:58.57 to win by 0.10. Briton Lynsey Sharp closed well to make it three under two, recording 1:59.34 for third.

Kendra Harrison put on a show in the women’s 100m hurdles, beating a high-quality field in a world-leading time. The contest was run over two rounds, and Harrison won the first heat in 12.50, tickling a few hurdles on her way. Olympic champion Brianna McNeal won the second heat and had looked more comfortable on her way to a 12.41.

In the final, Harrison moved best out of the blocks, although US compatriot Christina Manning got up alongside her. McNeal, unusually, was more ponderous, and although she worked her way back into contention by half way, Harrison – who set the world record here in 2016 – was hitting her stride.

Displaying terrific snap off the hurdles, she pulled away through the final four barriers to win in 12.36, the fastest time in the world this year.

“I wanted to run fast and cross the finish line first, which I did,” said Harrison, whose win is her first in the IAAF Diamond League since May’s opener in Doha.

“I know these girls all push me and my coach has been trying to make me run as little as possible, but my body is starting to peak when I want it to.”

McNeal, the IAAF Diamond League leader, was second in 12.47, while Sharika Nelvis raced well through the second half of the race to record a season’s best of 12.51 and finish third.

There was another fascinating battle in the women’s 200m. Briton Dina Asher-Smith looked best out of the blocks, making up the stagger on world champion Dafne Schippers within the opening strides.

Schippers moved ahead into the straight but quickly faded. Asher-Smith then led briefly before US champion Jenna Prandini found an extra gear. She could not be caught over the final 50 metres and won in a personal best of 22.16. The victory moves her to the top of the IAAF Diamond League standings.

“I felt great in a great field, and running a PB in that is awesome,” said the Californian. “With no World Championships this year, the Diamond League is my most important event, and getting into the final and winning that trophy is my main aim.”

Jamaica’s Akeem Bloomfield smashed his personal best by 0.19 to win the non-scoring men’s 200m in 19.81. Alonso Edward and Nethaneel Mitchell-Blake had started well, but Bloomfield, winner of the 400m in Rabat last week, started motoring as he hit the straight, breaking the tape to comfortably beat Edward, who came through for second.

Few expected Mariya Lasitskene’s defeat in Rabat last week, when an under-par 1.90m saw her 45-competition win streak end abruptly. In London she showed it was a mere blip, matching her world lead of 2.04m to prevail in the same stadium in which she won the world title last August.

Yet the performance of Italian Elena Vallortigara, who made third-time clearances at 2.00m and 2.02m to record consecutive personal bests, meant Lasitskene could not relax. Needing two attempts at those same heights, Lasitskene then sailed over 2.04m first-time to put the competition to bed.

“I have the power to keep going forward and go higher,” insisted Lasitskene. Of Vallortigara’s performance, she added: "I thought that I would have to push myself higher to stay on top.”

If Vallortigara’s upturn in form continues – the 26-year-old had jumped no better than 1.91m before this season – Lasitskene could have the rival the event has needed.

“I feel like I am the main man at this stadium,” said Manyonga. “Coming back into a great atmosphere with these fans means so much.”

His compatriot Ruswahl Samaai also found his best form of the season to finish second, his 8.42m also coming in the fourth round. Jarrion Lawson’s season's best of 8.25m was enough for third, one centimetre ahead of Australian Henry Frayne.

Sandra Perkovic did not have to be in top form to extend her unbeaten run in the discus to 14. The two-time Olympic champion’s opening round throw of 67.24m was her single legal throw, still enough to comfortably defeat Cuban Yaime Perez, who was best of the rest with 64.43m. The IAAF Diamond League trophy will surely return to Croatia after the Brussels final.

Another London victory for Sandra Perkovic

Stephenie Ann McPherson was a comfortable winner in the non-scoring women’s 400m. She was sharp through the first 200 metres and had enough in the tank to pull away down the straight, winning in 50.31 from Jamaican compatriot Anastasia Le-Roy. USA’s world indoor champion Courtney Okolo was third.

Another non-scoring event was won by another Jamaican athlete. After a competitive opening half of the men’s 110m hurdles, Ronald Levy emerged off the fifth barrier with a lead. The Commonwealth champion held it through the remainder of the race to win in 13.13. The seven who followed him across the line were apart by just 0.14, Devon Allen winning the battle for second, clocking 13.30.

Notable from the meeting undercard was a 4x100m world lead of 37.61 by Great Britain & Northern Ireland. 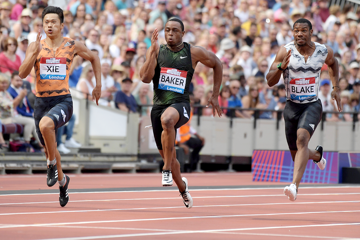