The Kenyan had successfully defended his world cross-country title in 28:24, and flung his arms around the neck of his coach, 1992 Olympic steeplechase silver medallist Patrick Sang, in ecstasy.

“My celebration with my coach Patrick Sang was really amazing,” Kamworor said with a big smile on his face.

“He has always encouraged me, he has always given me a lot of support. In training he always advises me and I am really, really proud of him. That’s why I had to celebrate with him as soon as I crossed the line.”

The celebration was the perfect ending to what had been a remarkable day for the Kenyan. Kamworor became the first man since Kenenisa Bekele in 2006 to successfully defend the senior men's title at an IAAF World Cross Country Championships. To top it off, it was one year to the day that he had won his last global gold medal, the world half marathon title in Cardiff.

The magnitude of the date had been on his mind since breakfast.

“I remember in the morning telling my teammates that last year on the 26th March I won the world half marathon [title],” he recalls.

“And I told them that I would really like that gold medal I won last year to become another medal. Now it has really happened I am feeling so, so great and happy. It’s really a historic moment for me.”

He had timed his race to perfection. Joshua Cheptegei was leading for a large part of the race, but with just over one kilometre to go, the Ugandan’s legs gave way and he was swallowed up by the rest of the field. Kamworor says he knew he couldn’t allow himself to get carried away too early in the race.

“When he [Cheptegei] decided to pull away, I felt for myself that it was a suicide pace and I knew I couldn’t cope with that pace. So I decided to run my own pace and just focus on my last kilometre.

“So when I closed the gap, I really got determined and I gained a lot of morale from the cheering squad from Kenya. It was then that I knew I was going to win.”

It wasn’t the first time that Kamworor proved his tactical strength, especially over the latter stages of a race.

In Cardiff 12 months prior, he secured the world half marathon title despite falling at the start of the race. He clawed his way back to the front with blood streaming down his knees and won his second world half marathon gold. One of the men he defeated in the process was double world and Olympic 5000m and 10,000m champion Mo Farah.

In five months’ time, Kamworor is looking to return to the Briton’s home soil and take on the challenge of preventing Farah from winning his third consecutive world 10,000m title.

“The 10,000m in London is really my focus,” he says. “It’s really nice to run cross country as preparation for my track season. I think it’s important for my speed endurance.

“In 2015 I was really focused to win the title, but I got silver, so I am not satisfied yet. I want to win the title. I am working so hard for it. That’s really my big dream and I will work for it until I fulfill it.” 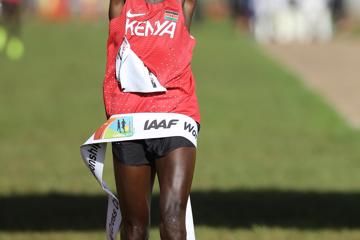 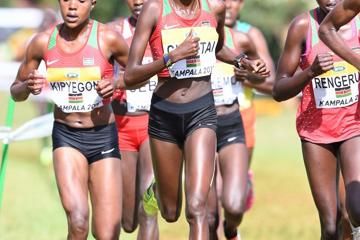 Bursting from the shadows, Cheptai makes her ...