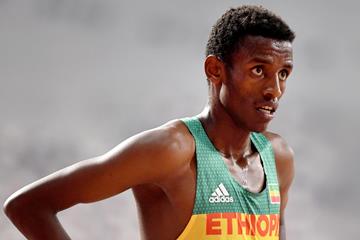 This time last year, few people in the athletics world had heard of Lamecha Girma.

Even in his hometown of Assela – the same area that produced stars such as Haile Gebrselassie, Kenenisa Bekele, Tirunesh Dibaba and Derartu Tulu – not many had taken notice of the young teenager who finished a distant fifth in the steeplechase at the Ethiopian U20 Championships in 2018.

Girma had joined the Tirunesh Dibaba Athletics Club a year or two earlier and was training for the 1500m, but club coach Kefyalew Alemu noticed Girma’s height and long stride and suggested he might be good at the steeplechase.

After decades of Kenyan steeplechase dominance, Ethiopian runners were finally starting to make an impact in the steeplechase.

But still, no one knew of Girma.

Girma moved to the Youth Sport Academy in Addis Ababa to be coached by Teshome Kebede, the national coach for the steeplechase, and to train alongside Wale and a couple of other promising middle-distance runners.

Girma then headed to Addis Ababa to compete at the senior Ethiopian Championships – his first senior-level competition – but he fell and twisted his ankle, so was unable to finish. Fortunately, though, he was still invited by the national federation to participate in Ethiopia’s World Championships trial race in Hengelo two months later.

While much of the focus in Hengelo was on the high-quality 10,000m races, Girma let the national selectors know they had another exciting steeplechase talent by winning his race in 8:08.18, finishing more than six seconds ahead of his nearest opponent.

The performance made him the fourth-fastest Ethiopian in history up until that point. It would have also been a national U20 record were it not for the fact that Wale had gone a few seconds quicker just one month earlier.

Nevertheless, Girma had done enough to earn a spot on Ethiopia’s team for the World Athletics Championships in Doha. And, significantly, athletes and fans were starting to take note.

Girma’s first appearance in an overseas invitational came in the Diamond League meeting in Paris, where he was up against a field of global medallists, including world and Olympic champion Conseslus Kipruto.

If Girma was nervous, he did a good job of hiding it. After staying in third or fourth place for most of the first half of the race, he moved into the lead once the pacemaker dropped out at 2000m. The top contenders moved past Girma as the bell sounded for the final lap, but Girma wasn’t finished and briefly regained the lead with 200 metres to go.

He was eventually out-kicked by Soufiane El Bakkali and Benjamin Kigen in the closing stages, but Girma’s third-place finish in 8:08.63 was a noteworthy Diamond League debut and showed that his Hengelo performance wasn’t a fluke.

Two weeks later at the Diamond League final in Brussels, Girma again placed third, this time in a PB of 8:07.66 and finishing even closer to the winner. It was a confidence-boosting performance ahead of the World Championships.

Despite his promising results in Paris and Brussels, Girma tried to keep his expectations low in Doha.

“It was my first race at the World Championships, so I didn’t know what to expect,” he says. “I had trained hard for a good result, but I didn't expect to win.”

He passed his first test with flying colours, winning his heat in 8:16.64. He may have been a novice, and a promising one at that, but Girma knew that the final would be the toughest challenge of his young career.

Kipruto, who had missed most of the season through injury, was rounding into form at the right time. A formidable championship performer with vast experience, the Kenyan was desperate to retain his title. 14 other men in the field would be vying for medals too.

Girma’s teammate Chala Beyo was the early leader before Wale, Girma’s training partner, took up the running and led the field through 1000m in a swift 2:39.55. Girma then took up the pace and led through 2000m in 5:22.95 with Wale, Kipruto, Abraham Kibiwot and El Bakkali for company, all of them looking comfortable.

El Bakkali moved into the lead at the bell, but Girma kicked to the front with 200 metres remaining. Kipruto then moved past the Moroccan into second place and in pursuit of Girma. The two men flew over the final barrier with Girma still managing to hold a slight advantage over the Olympic champion, but Kipruto was gaining on the young Ethiopian with every step.

They crossed the line almost in unison, both unsure of the outcome as they waited nervously for the times to come up on the screen. Finally it was confirmed: Kipruto had successfully defended his title in 8:01.35. In the closest ever finish in the steeplechase at the World Championships, Girma took the silver medal in a senior Ethiopian record of 8:01.36.

“On the final straight, I thought I could win the race,” says Girma, who went to third on the world U20 all-time list, sitting behind world record-holder Saif Saaeed Shaheen and Kipruto. “When I crossed the line, I thought I'd done it. But it was my first major international competition and it was a good result.

“I'm happy with the silver medal; I couldn't do any more than that. I am thrilled to be the first Ethiopian to win a steeplechase medal at the World Championships.”

Now a world silver medallist, Girma is no longer an underdog.

He was shortlisted for the Rising Star award at last year’s World Athletics Awards in Monaco, an honour that compatriot Selemon Barega won. But Girma went on to win the Young Athlete of the Year award from the Confederation of African Athletics.

Still aged just 19 – he’ll turn 20 in November – there is now a certain level of expectation placed on his young shoulders whenever he lines up for a race.

He’ll soon make his indoor debut and is set to compete at the World Athletics Indoor Tour meeting in Lievin on 19 February where he will face Barega and 2019 world 5000m leader Telahun Haile Bekele.

And while the rising standards of Ethiopian steeplechasing means no place on the national team is secure until after the trials, Girma hopes to book his place on the team for the Tokyo 2020 Olympic Games where he will aim to become the first Ethiopian athlete to win an Olympic steeplechase title.

“My 2019 season was good,” he says. “Now I am going to work very hard to be stronger and to try to win an Olympic gold for my country.”