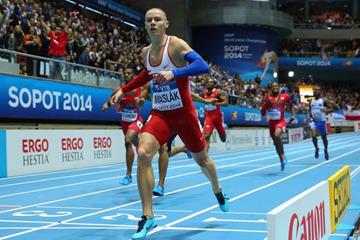 European victories in the IAAF Diamond League men’s 400m are a rather rare commodity. In fact, there have been only two – the Borlee brothers, Jonathan and Kevin, taking one win apiece in 2012 – in 28 races during the League’s four-year existence.

However, Pavel Maslak is aiming to boost those numbers quite a bit in the coming months and after his success at the IAAF World Indoor Championships earlier this month, he has some of the big guns from across the Atlantic in his sights, especially at the 2014 IAAF Diamond League opener in Doha on 9 May.

“The Diamond League will have the best races this year, with the elite athletes from all over the world. There was just a small part of the top men running indoors, so it will be different in the Diamond League races,” commented Maslak.

“(LaShawn) Merritt and (Tony) McQuay, for sure, they will be fast. But it will be just another race for them without a major championship in 2014, so I do not think they have had the same training as last year,” speculated Maslak, gearing himself up for the challenge of meeting last year’s world 400m gold and silver medallists in about six weeks’ time.

In some respects, despite the talent and credentials of the US duo, Maslak is more concerned about Grenada’s Olympic champion Kirani James.

“He shows excellent times every year and he has always been well prepared. I think he will get even faster this year, but I am also curious about (Dominican Republic’s Moscow 2013 bronze medallist) Santos or the Borlee brothers. I am expecting a couple of people going sub-44 seconds and even more breaking 44.60.”

Maslak firmly expects to be, at least, a member of the latter group by the end of this season, improving on his national record of 44.84, set in his Moscow semi-final before he finished fifth in the final.

“My training shows that I could be able to run about 44.50 in the summer, but all will depend on the quality of my preparation.”

One target that is now also being talked about among athletics fans is whether Maslak can attack the long-standing European 400m record of Thomas Schonlebe, which has stood since the 1987 IAAF World Championships in Rome.

Maslak met Schonlebe, now 48, in the German city of Chemnitz a few months ago and inevitably it was a topic of conversation. “Of course, I would like to improve it, but 44.33 is pretty fast. I am getting prepared for it but I do not think it will come in the following season,” added Maslak modestly.

Nevertheless, Maslak comes off a fantastic winter in which he managed to improve the European indoor bests over 300m and 500m. His 20.52 200m in Prague last month was the fastest European time over one lap of the indoor track this winter.

Added to all of these statistics was his win in Sopot in a national indoor record of 45.24, the second-fastest time ever run by a European athlete indoors.

"To be honest, I expected an even faster time. The first rounds showed it could have been very fast," reflected Maslak.

"But I still cannot believe it. It is my most precious medal, but this event is different indoors. It is an advantage to be a shorter guy," said the 1.77m-tall soldier, who is the current European 400m champion, indoors and outdoors.

In Sopot, Maslak made sure he was in pole position almost from the gun, flying through 200m in 21.17.

"I do not like pushing and after what happened to Denisa Rosolová in the women’s 400m semi-final, I was careful. Even so, somebody pushed me from behind after the first lap but I do not know who. It fired me up and I started to run even faster after that.”

Maslak has a reputation of appearing calm, even nonchalant, apparently not feeling the pressure of big competitions. Unlike some of his US counterparts, he’s not much of a talker but he still gets along well with other athletes.

"Maybe I looked cool and calm before the start (in Sopot) but, in fact, I was very nervous and tense. I tried to relax before the race, played some video games, watched movies,” said Maslak.

"It is amazing to become the world champion, I cannot describe it, but this is just a start of the year and I will focus on defending my European title in Zurich."

He took some deserved holiday after Sopot, spending time mainly with his family when he made a point of enjoying his favourite meal – schnitzel with a potato salad – on several occasions but on Monday (24) his training group, led by coach Dalibor Kupka, left for South Africa to get ready for the outdoor season.

The 23-year-old Maslak has a large tattoo of a dragon on his back, as he is slightly superstitious and believes that the dragon is a symbol of good luck.

However, his recipe for sport success is very simple, and certainly not down to luck.

"The most important is to work, work and work hard. There is nothing special in it, and to believe in yourself. Very often, I do not feel like going for training, especially when I have to go alone. I have to push myself, but when I finally go, it is worth it."