The Ethiopian winner Hagos Gebrhiwet covered the 7.83km course in a stunning 21:04.

Even allowing for a considerable drop off in pace, it's not inconceivable that Gebrhiwet could have covered 10km of cross country in roughly 27 minutes and and many people were pondering whether he might just have been the best ever junior men's champion in the four decades of the race.

Of course, by the nature of cross-country races even at a global championship, there have been some slight variances in distance and some extremely diverse conditions in the four decades since the event came under the auspices of IAAF.

However, nearly all bystanders were in agreement that, including trying to balance all the relevant factors, Gebrhiwet could have uncorked the best performance ever seen in his category

Three runners have finished in a faster time than Gebrhiwet but just by a few seconds and on courses that were up to a kilometre shorter than the one negotiated in Myslecinek Park.

It is a sobering thought that the very first winner of the junior men's title at the championships, Scotland's Jim Brown, would have ended up about 900 metres in arrears of Gebrhiwet if they had been racing together on Sunday.

Brown, who coincidently was actually 20 at the time of his triumph when different rules prevailed, crossed the line in 1973 in 20:52.8 when the race was over only 7020m.

One of Gebrhiwet's illustrious predecessors, the great Kenenisa Bekele, took 25:04 to win the first of his 12 IAAF World Cross Country Championships gold medals in the famous mud bath when the event was held in the Belgian coastal town of Ostend in 2001, but the course was only 7.7km.

Sunday's race was also held in far from perfect conditions as well. The World Cross Country Championships have been held on no fewer than 17 horse-racing courses as well as two golf courses but Myslecinek Park was neither of those.

The temperature never rose below zero and the course was rutted and frozen in places. In addition, there was a challenging hill at the end of each lap.

After a first 1.92km lap of 5:26 in the junior men's race, three seconds faster than their senior counterparts, a three-man group pulled away during the third kilometre with Gebrhiwet's compatriot Muktar Edris and Kenya's Leonard Barsoton, the eventual bronze and silver medallists, pushing the pace.

Gebrhiwet's two rivals contributed to that lap being passed in a super-quick 5:08, 13 seconds quicker than anything that was to be seen in the senior men's race later in the day.

The pace continued to be unrelenting but the trio were still together at 6km after a 5:11 third lap.

It was only on the final lap that Barsoton and Edris started to flag as Gebrhiwet turned the screw and finished with a 5:18 lap.

All three of the last laps were faster than the senior men managed at any point in their race.

“The weather was very tough, so I was very happy,” said Gebrhiwet through an interpreter. "It was very hard, with all the snow, but at least it wasn't muddy."

“My ambition this summer is to break my world junior record over 5000m," he added. "I will make the necessary training."

Still just 18, Gebrhiwet clocked a world junior indoor 3000m record of 7:32.87 in Boston at the start of last month and he ran a world junior 5000m record of 12:47.53 at the Diamond League meeting in Paris last summer to rank seventh on the all-time list for the distance.

Although he dismissed notions that he was also contemplating an attack on Kenenisa Bekele's world record of 12:37.35, set in Hengelo nine years ago, any reduction in his own standard would inevitably take him closer to his compatriot's mark, or perhaps even surpass it.

Like a number of other leading long-distance runners over the years, not least the Ethiopian legend Abebe Bikila and Great Britain's current Olympic and world 5000m champion Mo Farah, Gebrhiwet came to the sport via football, only finally concentrating on athletics when he was 15.

“I tended to play a lot of football when I was growing up and I think that has given me the endurance I have now," said Gebrhiwet. "But my ambitions for football are finished, I am not a frustrated footballer, athletics is my destination."

Football's loss is athletics' gain. Ethiopian football is on a high at the moment having reached the finals of the African Cup of Nations in January for the first time in 31 years.

However, on the evidence presented in Bydgoszcz and his other record races, Gebrhiwet made the right choice a few years ago and could bring his country even greater glory on the running track, perhaps even before he has left his teens. 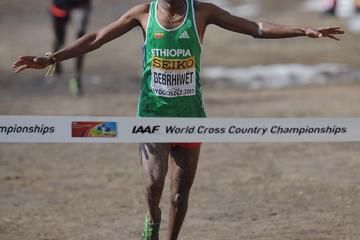