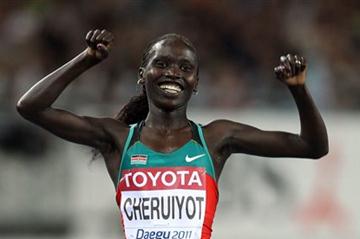 A place on the podium in Beijing the aim for Cheruiyot

Four years have passed since Vivian Cheruiyot achieved double glory in the Korean city of Deagu but, having returned from maternity leave in emphatic fashion, the diminutive Kenyan distance runner has her eye on the ultimate comeback prize by winning a medal at the IAAF World Championships, Beijing 2015.

Having returned to training in June 2014, Cheruiyot and her husband and coach Moses Kiplagat made the decision not to bid for a place on the Kenyan team going to the the IAAF World Cross Country Championships in Guiyang, China, back in March and instead focus their attention on making the national team for the longer event in Beijing.

“My training has been going well and I was confident that I would make the team,” said Cheruiyot.

“The pace was slow, which suited me perfectly as I normally have a good finishing kick, and it was a very hot day in Nairobi, but I was very comfortable throughout the race.”

She will be seeking her fourth world senior title on the track later this month, having also won the 2009 world 5000m title. Despite her long absence from major championship racing, Cheruiyot is feeling confident.

“I feel I am ready to reclaim my title," she said. "I think it is possible to win in Beijing if all goes well in training between now and then because I am training well, and my shape is improving every day."

“Kenya has a strong team with me, Betsy Saina and Sally Kipyego (the Olympic 10,000m silver medallist). We will try our best to take all the medals but we know the competition will be tough.”

Cheruiyot’s reappearance in the sport this season has been highly successful so it is little wonder her belief is strong coming into Beijing.

Add to that a 4:09.88 clocking to claim the Kenyan 1500m title four weeks ago and the future looks promising for the 2011 Laureus World Sportswoman of the Year.

“I was happy with my performances in Eugene and Rabat," she said. "I was using these races to ease myself back into competition so I started slowly and worked my way through the field."

Based in the Rift Valley province of Eldoret, the Commonwealth 5000m record-holder – with 14:20.89 for fifth on the world all-time list – appears to be excelling in her task to juggle motherhood and her athletics career.

“I have really enjoyed motherhood," she said. "Allan is a very happy healthy boy, he is full of energy and loves being outdoors playing and running around."

“I am very fortunate to have my husband, who helps a lot and makes it easier for me to focus on training.”

She admits that the decision to start a family originated from her disappointment at missing out on an Olympic gold medal in London three years ago.

“In 2012, I had an early-season achilles injury, which meant I missed a lot of training and then I got the flu when I came to London.

“I sat down with my husband and manager and we made a plan to have a baby and then be back at full fitness in time for the 2016 Olympic Games.”

On her return to training with the longer term plan in mind, Cheruiyot added: “I purposely took my time with my build up, increasing my mileage very gradually and allowing my body to adapt.

“I started with long slow runs to lose weight. I gained 15 kilograms during my pregnancy, and first I had to reduce my weight before introducing tempo runs, hill work and track sessions. I am now back to my normal training regime.”

Cheruiyot took advice from other world-class running mothers such as Mary Keitany, the 2009 world half-marathon champion.

“It was good to get back to racing in January but I was aware that I wasn’t at full fitness so I was just using it to gauge where I was at in my training. I did miss competing but I really enjoyed starting a family and enjoying spending time with my son.

“After the World Championships, I will do a few track races, have a short break and then focus on road and cross country to prepare for 2016.

“I don’t have an Olympic gold medal and this is the thing that drives me every day.

“I have not yet decided about doubling in Rio, it will depend on my fitness at the time. I expect 2016 to be my last championship on the track.

“After that, I will focus on road races. London (the venue of the 2017 IAAF World Championships) is like my second home so it would be nice to run the marathon there.”

It is clear Cheruiyot is keen to weave herself back into the world athletics tapestry in China, Brazil, Great Britain and beyond – and with her new family beside her.

Nicola Sutton for the IAAF