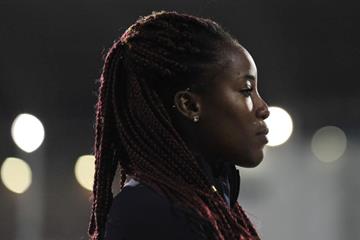 Youth Olympic champion Yanis David went to Bydgoszcz as one of the favourites for the triple jump title. She will leave the Polish city as the world U20 long jump champion.

Some may argue that the exuberant 18-year-old competed too much here in Bydgoszcz, but David has no regrets.

“My body hurts everywhere,” she said after finishing ninth in the triple jump final on Saturday morning, just 14 hours after the conclusion of the long jump final. “I’m a little tired but I am so proud.”

David’s Polish campaign had started on Thursday morning and it took her all three of her qualifying attempts to grab a spot in the long jump final. The following day was arguably her busiest as she narrowly avoided disaster in the morning’s triple jump qualifying round, once again needing three attempts to secure one of the 12 spots in the final. David had to compose herself and deal with two fouls before she could finally hit the board and register a mark.

“I honestly would have preferred to take just one jump and avoid all the stress of the two opening fouls,” she said in her native French. “I was so relieved to make it through.”

Relieved and free from the stress of qualifying, she looked far more poised when she lined up for the long jump final just six hours later. This time around she was not going to make the same mistake, and her mighty 6.42m opener, just six centimetres short of her personal best, would prove good enough for the gold.

“I am so happy, this is the first time that I have cried (in a competition),” she said after a competition in which she yet again recorded two fouls. “I still can’t believe I’m a world champion.”

With teammate Hilary Kpatcha holding the bronze medal position, David was having fun in the pit. But the French supporters in the stand were having even more fun, chanting and clapping louder than all the other fans.

As the event rounded up and medals were confirmed, David and Kpatcha hugged in one of the championships’ nicest moments. Meanwhile, French officials, coaches and teammates gathered around and started singing a spontaneous Marseillaise.

“They were just really happy for me. And for us,” said David. “It’s our first gold, actually our first medals of the championships. It simply feels good to sing the national anthem. It brings us all together.”

David was all smiles as she went through media duty, switching from French to English. And although her English is not yet perfect, she has definitely improved since moving to the University of Florida in January where she trains with the likes of world indoor champion Marquis Dendy under the guidance of coach Nick Petersen.

“They came for me,” she said of the recruiting process. “I didn’t really know what to do after graduating, but they offered me a scholarship and now I’m a gator.”

It hasn’t been an easy decision for David who had to leave behind her mum, dad and grandma in her native Guadeloupe, an island that has produced many French stars, including Marie José Pérec, Christine Arron and Wilhem Belocian, winner of the world U20 110m hurdles title in Oregon two years ago.

“I’ve had my ups and downs since moving,” says David. “I’ve felt lonely many a times but it’s paying off and I’m so glad.”

Among one of her lowest moments of the past six months was having to adjust to the US culture and fast food. David revealed that she has had to work with a nutritionist to get back to her former competitive shape, although she admits she hasn’t yet reached her ideal weight.

Jack of all trades, master of the jumps

Aged six, David came to athletics by chance. She’s the first in the family to excel in the sport, in any sport really. “I had to do sports. It was either tennis or athletics and I had no interest in tennis.”

Athletics it was. From the early stages she has touched upon almost every athletics event – “I think the only thing I haven’t tried out is the hammer” – and actually began as a middle-distance runner. “In my age group I ran a lot of 600m and 1000m races.”

David also sprinted, hurdled and completed a few heptathlons before finding her niche in the horizontal jumps. She knows that’s where her future lies, although she doesn’t rule out focusing more on sprinting someday.

Petersen is full of praise for his new-found gem. “The first time I saw her, she was 15 in Bermuda. She won the long jump at the Carifta Games,” he recalled.

“She has only just started with us; once we’ve had a full fall with her, you will see her full potential,” he added. “This is just the beginning.”

David admits she was stunned by her achievements in the long jump in Bydgoszcz.

“I did not expect to win gold,” she said. “I just trusted my abilities and then I started believing this could actually happen. I was a bit tired from the triple jump qualifiers so I gave it all I had with my first jump. I think my third jump was better but I fouled. I think I could’ve jumped further but I’ll take that mark.”

Although it didn’t work out so well for her in the triple jump, she is quick to point out that she “still loves the triple jump”. But she may also love the long jump “a little more” than before.

And who could blame her for that?