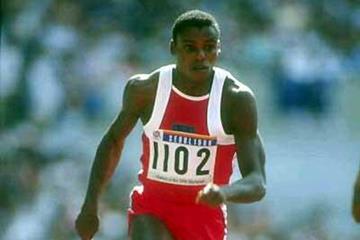 Carl Lewis is to attend the XII edition of the IAF World Athletics Gala, sponsored by the Compagnie Monégasque de Banque (CMB) and the MONDO company.

The Gala will take place on Friday 21 November in the Salle des Etoiles of the Monte Carlo Summer Sporting.

In recognition of Carl Lewis exceptional career in athletics, spanning nearly twenty years, the Council of the Foundation has decided to make a unique award, in standing with his unique career, naming him ""Athletic Legend".

At the age of 36, Lewis has decided to end his competitive career after winning nine Olympic gold medals - the last one in Atlanta in 1996, in the long jump - and nine medals, of which eight golds, in the World Championships. He had an unbroken run of 65 wins in the long jump: from 28 February 1981 - when he lost to Larry Myricks - until 31 August 1991 and his historic encounter with Mike Powell in the World Championships in Tokyo.

He has been one of the most extraordinary sprinters of all time, with no less than 15 performances - in legal conditions - under 10 seconds in the 100m and the world record with 9.86 in the final at the 1991 World Championships. He has also had some exceptional results in the 200m, running 19.75 in 1983 and scoring another nine marks under 20 seconds, always in legal conditions.

The presence of Carl Lewis at the IAF World Athletics gala - where he has already been named athlete of the year on two occasions, in 1988 and 1991, adds another star to the long list of personalities from the worlds of sport, the arts, business and politics who will celebrate together the close of a magnificent season of athletics and the 700th anniversary of the Grimaldi Dynasty in the Principality of Monaco.