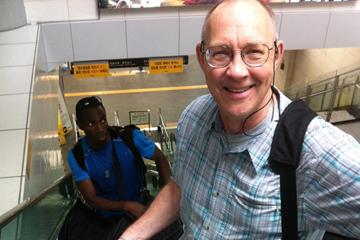 The IAAF is deeply saddened by the news that Jon Hendershott, one of the most respected athletics journalists in the US, died on Monday (9) at his home in Salem, Oregon due to complications from a stroke he suffered on Sunday. Hendershott, who spent nearly 50 years working for the US publication Track & Field News, was 71.

Born July 20, 1946 in Bend, Oregon, Hendershott spent much of his youth surrounded by athletics. His father Bob was a high school and college athletics coach, a passion that proved hereditary.

Hendershott crossed paths with a copy of Track & Field News for the first time in 1962 at age 16 when his high school track coach shared the magazine with members of his team. He subscribed immediately, beginning a relationship that would last the rest of his life.

Upon graduation from high school, Hendershott studied journalism at the University of Washington until 1967 when Track & Field News published a help-wanted ad seeking an editorial assistant. He answered, was hired, and transferred to California's San Jose State University where, sharing the campus commons with the likes of Tommie Smith and John Carlos, he completed his studies while working at the magazine.

Over the course of the next five decades, Hendershott covered hundreds of regional, national and international competitions, including nine Olympic Games and 15 world championships. Through the 1970s and 1980s it was his work as an interviewer and feature writer that proved most influential, not only elevating the standard of the magazine, but also by helping to shape coverage of the sport elsewhere in the US and around the world.

Hendershott was twice elected president of Track and Field Writers of America (TAFWA) and named the body's Journalist of the Year in 1989 and 2012. He authored and edited several books on the sport, including 'Track's Greatest Women' in 1987, which featured chapters on 15 of the greatest female athletes up until that time.

Hendershott retired from Track & Field News in 2016 but continued to report on the sport on a freelance basis for several outlets, including the IAAF website, literally until his final days. On Saturday, the day before he suffered his fatal stroke, he traveled to Eugene to cover the Oregon Team Invitational.

By his colleagues, Hendershott will be remembered most for his knowledge and passion for the sport, for his patience and encouragement as an editor and reporter, for his kindness and compassion, and for a seemingly ever-present and infectious smile.

NB: Two more pieces we encourage you read: Track & Field News' obituary and this piece by long-time colleague and friend Paul O'Shea, published soon after Hendershott's retirement from T&FN in 2016.