Reigning World Long Jump champion Dwight Phillips, will miss the US Olympic Trials later this month and will not take part in London 2012.

The 2004 Olympic gold medallist and four-time World champion (2003, 05, 09, 11), whose build-up to this summer’s Olympic Games had already been disrupted by injuries sustained in a car accident earlier this year, confirmed, "due to a reoccurring Achilles problem I will not make the trials. I want to thank my sponsors Nike and Kellogg's and fans for all your support. I have had surgery and I am looking forward to competing at the World Championships (Moscow) in 2013 which will be my final year."

Phillip’s Australian rival Mitchell Watt, silver and bronze medallist behind him in Daegu 2011 and Berlin 2009 respectively, was one of many offering their best wishes on twitter, hoping for a "smooth recovery".

IAAF
BACK
Pages related to this articleDisciplines
Long Jump 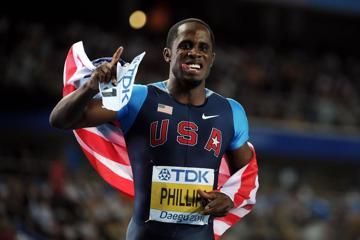