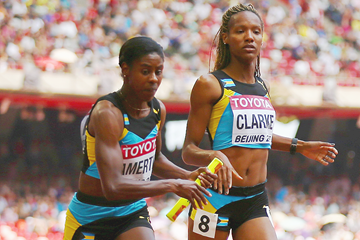 When it comes to athletics, The Bahamas is a nation of relays.

And although the men’s 4x400m has been the cream of the relay crop in recent times, the women’s unit is emerging as a strong force.

The Bahamas’ men’s 4x400m team has finished second at the past two editions of the IAAF World Relays and is gearing up for a third straight strong appearance at home this year. The women’s 4x400m team, meanwhile, is optimistic about this year’s World Relays coming off two strong global appearances and a national record that was set without its fastest runner.

The country has not yet reached a senior global championships final in the women’s event, but the progress has been significant.

At the Rio 2016 Olympic Games, the Bahamian quartet set a national record of 3:26.36 to finish sixth in their semifinal, missing a spot in the final by little more than half a second. Surprisingly, they did it without Shaunae Miller, the individual 400m Olympic champion.

The team of Lanece Clarke, Anthonique Strachan, Carmiesha Cox and Christine Amertil took more than two seconds off the previous national record in what was the country’s first appearance in the women’s 4x400m at an Olympic Games – hence the optimism for this year’s IAAF World Relays on April 22-23 at the Thomas A Robinson National Stadium.

“The women’s 4x400 is coming,” said BAAA President Rosamunde Carey. “In fact, they are already here. Those young ladies put in an awesome performance at the Olympics last year. Led by veteran Christine Amertil, they gave it their all.

“A lot of those young ladies were at their first Olympics and they were jittery. They were determined to make it into the final, and they came very close to doing so. The sky is the limit for them, and Christine has vowed to come back and help them again. They are all excited and ready to go for this year’s World Relays.”

Combination of youth and experience

Amertil, 37, has represented the country at five Olympics. The Bahamas lacked the depth at 400m to field a strong enough relay team for the 2000, 2004, 2008 and 2012 Olympics, but the 2006 world indoor bronze medallist now has a promising group of quarter-milers around her.

With runners such as Miller, hurdles specialist Katrina Seymour and teenager Shaquania Dorsett added to the quartet that competed in Rio, the future looks extremely bright for the women’s 4x400m squad.

The team of Clarke, Amertil, Seymour and Miller, in that order, set the previous national record of 3:28.46 at the IAAF World Championships Beijing 2015. A follow-up performance of 3:30.34 by Clarke, Cox, Amertil and Dorsett at the Blue Marlin Classic last year was enough to make it into the top 16 qualifiers for the Rio 2016 Olympic Games.

The team’s next target is to finish in the top eight at the World Relays in April to guarantee their place at the IAAF World Championships London 2017.

Talent identification is the key

According to Carey, the local programme is on the move, and it all starts at the grassroots level. They are looking to develop much more talent going forward.

“The Bahamas is known for the 400 meters,” she said. “There are a number of girls coming up who will add to the relay pool, and now they have someone like Shaunae, the Olympic champion, to look up to.

“Shaunae wasn’t able to assist the girls last year because of her fall in the 400m final, but she will be a part of the team this year,” added Carey. “Also, Christine said that as long as she is healthy, she will assist, and Katrina is looking very good. Shaquania is there as well, so there are a number of girls who could contribute.

“The goal is to have them qualify for the World Championships at the World Relays right here at home, and if that doesn’t happen, we have the Penn Relays right after that. We have to get all of our teams qualified.

“We have a training camp planned 10 days before the World Relays so that they could work on their synergy and be ready. Also, we have relay coordinators who are very experienced – veteran coaches have stepped forward and are prepared to work with them.”

“We are getting commitment from all of our athletes for the World Relays,” said Carey. “We’re so excited about it. The team is working hard to ensure that this comes off and that The Bahamas is well represented. To have this event come here again is truly historic. The LOC (local organising committee) brought in some new blood this year and now there is much more depth and the team will be able to gain experience.”

All three of the World Relays have been held in The Bahamas and the event is set to return to the Caribbean nation in 2019. Rarely is any IAAF championship event hosted in the same city and country on three successive occasions, particularly the first three editions of a global event such as the World Relays.

“Now that we have this event in our backyard again, the focus is to build our teams,” said Carey, who is also the CEO of the World Relays. “We have to start from the ground up in our programmes. We’re going into the Family Islands and seeking talent, not just in Abaco because we know that there is a good programme in Moore’s Island, but we are looking all over The Bahamas.

“We are going into CARIFTA 2017 with a focus of development. We have to get our athletes through the junior stage and ready for the next stage of their careers so that they could continue to excel in athletics as seniors. This year, our goal is to get all four of our relay teams qualified for the World Championships and we’re confident we can do that.”

The only global meet in which The Bahamas was able to qualify all four relay teams was the 2013 IAAF World Championships in Moscow. But with a good showing on home soil at this year’s World Relays, Carey is confident that they could duplicate that feat for the 2017 World Championships.