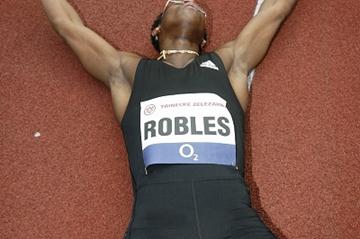 Just hours after becoming the sixth Cuban to break a World senior record outdoors**, sprint hurdler Dayron Robles, who trains at the IAAF High Performance Training Centre in Cuba, believes that "every world record is perfect."

Ready for the record

"I was ready to run under 13 seconds thanks to our excellent training so far. I felt comfortable and just focused on the gun and running as fast as possible. I saw the time and was shocked. I have been working hard to achieve things like this," an ecstatic Robles said.

At just 21 years of age, the 2006 World Indoor Championships silver medallist felt some magic in Ostrava as some of the current track and field stars assembled in the Czech city, including Jamaica's 100m World record holder Usain Bolt.

"The crowd was expecting something big. In the 110m Hurdles, the second, third and fourth place finishers from Osaka were here: Terence Trammel, David Payne and I. There was a good atmosphere, the wind, a nice temperature as I like it. I wanted to run well here as I had a poor race in Ostrava last year," he described.

“However, I am not so surprised because I have trained very well, in Ecuador and Cuba. I know I could run a fast race any time."

Ostrava was only his third race of the season. He made his outdoor debut in at the Golden League meeting in Berlin on 1 June, where he was second to then World leader David Oliver (13.19 to 13.20).

Five days later, he won easily on a wet track in Torino with 13.28.

"It rained a lot in Torino and the track was slow. Things are starting to come out step by step. We still have two months left before the Olympics, our main goal. Everything we do is focused on Beijing,” the 2006 CAC and 2007 Pan American Games champion added.

It's not a message for Liu Xiang

Looking ahead to the Beijing Games, Robles can’t but refer to the man he out-classed as World record holder.

“He (Liu) doesn’t need to be motivated by me and my performance,” Robles said after knocking 0.01 seconds from his Chinese rival’s two-year old mark. “That the Olympics are in China and that he’s the Olympic champion should be his motivation.”

The massive victory margin didn’t faze him nor did the uncharacteristic lack of rivals pushing him. He was simply out to prove a point to himself, and to others.

“Good results this season by other runners really motivated me,” he said, adding that if he could have his way, he would have preferred a more competitive race. “I focus only on me, but I like it better when everybody is there.”

He also said that he felt he owed something to the Ostrava meet organizers, after finishing a distant third last year in 13.45.

“I wanted to come back here because I ran poorly here last year. I wanted to prove to the organisers that I’m better than I showed last year.”

The young sprinter from the easternmost Cuban province in Guantánamo ran in the previous World record race in 2006 won by World and Olympic champion Liu Xiang (12.88) in Lausanne, where he was fourth with a massive personal best of 13.04. On Thursday, he was the main protagonist.

Robles becomes the sixth Cuban athlete to break a World senior record outdoors and regains the 110m Hurdles mark to the Caribbean Island, 31 years after 1976 and 1980 Olympic runner-up Alejandro Casañas ran 13.21 in Sofia, on August 21, 1977.

He came close to breaking a World record last winter, when he ran 7.33 in the 60m Hurdles, just three hundredths of a second slower than the indoor standard.

Cubans proud of their new-found hero

"I am very proud to join these great athletes Cuba has produced. They also set records being young. They are living examples in the sport," he commented.

Present in Ostrava, Menendez invited him to celebrate the record. "I came down and at least drank a soft drink with her."

"I have had good and bad experiences in the sport. People in Cuba expect a lot from me. This is a gift for my country, my family and my hometown of Guantánamo," Robles stated.

He thanked many people for the record but had special words of praise for his coach Santiago Antúnez, who has led Cuban sprint hurdlers to international success in the past 22 years.

"My coach has won medals of all colours, but he was missing a World record. We can now say he is the best sprint hurdles coach in the world. I am very thankful for being in his hands," he concluded.

Back home, all the media highlighted his record and broadcast the World record race.

"He told me he was ready to give it all out. He has trained hard to achieve this. Dayron will continue to give us joy and the track will have the last word in Beijing", his mom Regla Mercy, a former volleyball player, said.

Dayron Robles is expected to make his first appearance as a World record holder in Sotteville, France, on Sunday.

“I still have a long way to go,” he concluded. “I’ve never been to the Olympics, and I have to be prepared.”