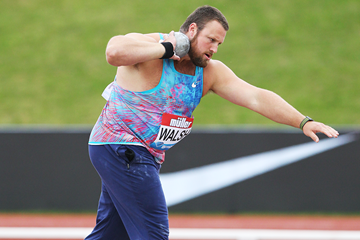 The shot put field at the Prefontaine Classic features every medallist from the past three global championships, setting the stage for another epic competition at the IAAF Diamond League meeting on 25-26 May.

Tom Walsh, world champion indoors and out, and Olympic champion Ryan Crouser headline the event. Seven of the nine men in the field have thrown 22 metres or farther.

Walsh secured his third global title when winning at the recent IAAF World Indoor Championships Birmingham 2018 with a lifetime best and championship record of 22.31m.

The New Zealander captured the top spot at last year’s World Championships and took Olympic bronze in 2016. He also won the 2016 IAAF Diamond League and was runner-up at the past two Pre Classics.

Crouser thrilled last year’s Pre Classic crowd with a stadium record of 22.43m. He went on to win the US title with a lifetime best of 22.65m – the farthest in the world since 2003.

Joe Kovacs won the world title in 2015 and earned silver at the 2016 Olympics and at last year’s World Championships. Having won in 2015 and 2016, Kovacs will be seeking a third victory this year.

US Olympian Darrell Hill launched a huge PB of 22.44m with his final effort in Brussels to take a surprise victory in last year’s IAAF Diamond League.

Two-time world champion David Storl returned to the championship podium by taking world indoor silver in Birmingham earlier this month, his first global medal since earning world silver in 2015, the year he also set his PB of 22.20m.

Tomas Stanek holds the Czech records indoors (22.17m) and out (22.01m). He is the European indoor silver medallist and world indoor bronze medallist.

Poland’s Konrad Bukowiecki, who will turn 21 later this month, is the youngest in the field. He won the European indoor title last year and last month improved his best to 22.00m.