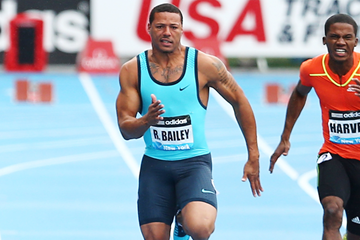 Ryan Bailey was one of the most familiar faces of the IAAF World Relays, Bahamas 2015, as he anchored the USA to a national record 37.38 earlier this month. He will be hoping to show off his prowess as an individual sprinter in the 100m at the IAAF Diamond League meeting in Eugene on Saturday (30).

Also going to their blocks at the Prefontaine Classic will be his compatriots and fellow members of the victorious 4x100m team in Nassau, Mike Rodgers and Tyson Gay.

Nesta Carter could challenge the US trio. He has led off the Jamaican gold medal 4x100m teams at the past two Olympics as well as the past two World Championships. The 2012 Olympic team set the world record at 36.84.

Kim Collins, the 2003 world champion, is a four-time Olympian for St Kitts and Nevis. Now 39, this winter he was undefeated indoors over 60m, clocking a national record of 6.47.

James Dasaolu won the European Championships 100m last summer and with a best of 9.91 a lot of interest will be on how he performs in his first race on US soil.

China’s Su Bingtian will also be racing for the first time in the US. He is a four-time Chinese champion with a personal best of 10.06.