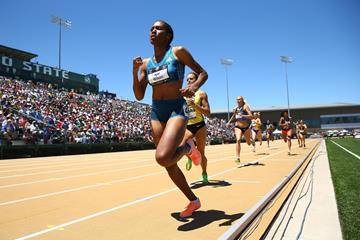 All eyes on Wilson in Eugene – IAAF Diamond League

Expectations are high for US 800m star Ajee’ Wilson this summer and she will get a chance to impress in front of a home audience at the IAAF Diamond League meeting in Eugene on 30 May after the meeting organisers announced their women’s 800m field on Wednesday (22).

Wilson, who will turn all of 21 on 8 May, captured the US indoor and outdoor 800m titles last year.

Her international experience also includes gold medals at the 2012 IAAF World Junior Championships and 2011 IAAF World Youth Championships, and she is the only US athlete to win either title.

Her domestic rivals include Brenda Martinez, who anchored the USA’s winning 4x800m team at last year’s inaugural IAAF World Relays, receiving the baton from Wilson before a 1:57.2 split to extend the lead over Kenya, which was anchored by world champion Eunice Sum.

Martinez has some history of making history. At the 2013 World Championships she earned a bronze medal, the first world outdoor medal of any kind for a US woman in this event.

Alysia Montano took a year off from racing in 2014. Well, almost as she was seven months pregnant when famously running a heat at last June’s US Championships, giving birth to daughter Linnea on 15 August 15.

However, the 2010 world indoor bronze medallist is keen to recapture her place among the top US runners over two laps of the track.

Chanelle Price is the world indoor champion, becoming the first-ever US woman to win a major world title in this event.

She is also the defending Pre Classic champ, and her memories of Hayward Field date back to a US junior title in 2009 as a University of Tennessee first-year student.

The woman they will all be looking to beat is Eunice Sum, who has won the Diamond Race in this event for the past two years.

In 2014, she won four straight IAAF Diamond League races and then claimed the African Championships and Commonwealth Games gold medals.

Her compatriot Janeth Jepkosgei was the first Kenyan woman to win a global 800m title when she won at the 2007 World Championships. She also owns the fastest personal best in the field with 1:56.04.

Three top-class Europeans add lustre to an incredible field worthy of an IAAF World Championships final, and each has set personal bests on a big stage.

Lynsey Sharp of Great Britain was the 2012 European gold medallist but ran her best of 1:58.80 when earning silver at last year’s continental championships.

Marina Arzamasova of Belarus won the European title in Zurich last August, finishing in front of Sharp in 1:58.15 and Russia’s Ekaterina Poistogova is the Olympic bronze medallist when she ran her best of 1:57.53.