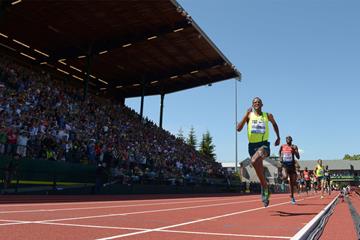 The winning times of the Bowerman Mile at the Prefontaine Classic have been faster than 3:50 for the past six years; a trend the IAAF Diamond League meeting hopes to continue on 29-30 May.

This year’s field could be the best ever, as the top 10 finishers from last year return, eight of them with sub-3:50 PBs.

Kenyan rivals Silas Kiplagat and Asbel Kiprop are set to duel again in Eugene for the fifth straight year. Kiprop has won three of the five outdoor global titles on offer over the past seven years, comprising Olympic gold in 2008 and world titles in 2011 and 2013.

But in terms of head-to-head records, Kiplagat has the edge. The 2011 world silver medallist won in Eugene in 2013 and last year clocked a world-leading 3:27.64 over 1500m on his way to winning the Diamond Race for a second time.

Ayanleh Souleiman will return to Eugene to defend his Bowerman Mile title. The world indoor 1500m champion from Djibouti won last year’s mile in a meeting record of 3:47.32, the fastest time in the world since 2007.

After winning the international mile in Eugene in 2012 and 2013, James Magut finished fifth in last year’s Bowerman Mile in a PB of 3:49.43 before going on to win Commonwealth 1500m gold.

Fellow Kenyan Collins Cheboi finished just behind Magut in Eugene last year, clocking a best of 3:49.56. Earlier that month, Cheboi had teamed up with Magut, Kiprop and Kiplagat to set a world 4x1500m record at the IAAF World Relays.

USA’s Matthew Centrowitz and Leo Manzano are also in the field. Centrowitz is a two-time World Championships medallist, taking silver in 2013 after a bronze in 2011, while Manzano is the Olympic silver medallist.

Kenya’s Ronald Kwemoi will be making his mile debut. Last year he set a world junior 1500m record of 3:28.81 and went on to win medals at the Commonwealth Games and African Championships.

World bronze medallist Johan Cronje will be looking to improve on the South African record of 3:50.70 he set in Eugene last year.

Like Kwemoi, Germany’s Homiyu Tesfaye and Kenya’s Vincent Kibet will be competing on US soil for the first time. Tesfaye finished fifth at the 2013 World Championships and last year set a mile PB of 3:49.86. Kibet set PBs at all distances last year, including 3:31.96 for 1500m.

Bethwell Birgen has represented Kenya at three global championships. Twice a top-five finisher in Eugene, he set his mile PB of 3:50.42 at the 2013 Prefontaine Classic.